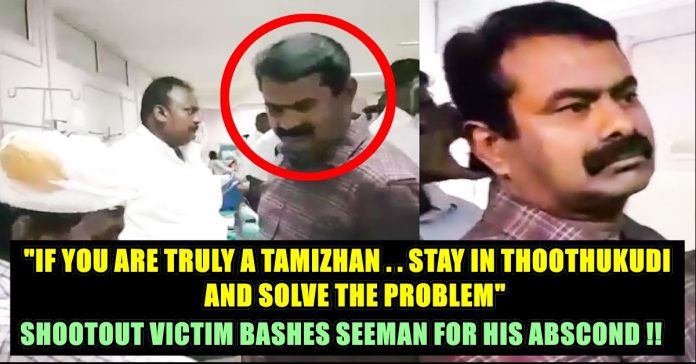 According to hospital sources, the condition of two persons, who suffered head injuries in police firing, is critical. A team of vascular surgeons from Government Rajaji Hospital in Madurai has been called to perform surgeries here. After the police firing, many were rushed to the Nalathambi hospital just opposite the Collectorate, but thirteen people could not be saved.

At the hospital, Silvai and his wife Manimalar from the Threspuram village were waiting outside the ICU. Silvai’s 20-year-old brother Sinthastin had been shot on the leg.

“They shot a small boy and a 43-year-old woman too in our village. The police are supposed to give us protection. We never imagined that they would kill us. Right from the morning, police did not even allow us to step out of house. We had strengthened our protest after a nine-year-old from our area died of cancer recently,” Manimalar said. Krishnakumari’s 18-year-old son Raja Singh who had been shot at was also getting operated on. “We live near the by pass road and my son was watching the protest from outside. Without any provocation the police resorted to fire. My son is an innocent victim. He was shot in the leg,” she said.

“27 people have been admitted with bullets in their bodies. We can’t blame the doctors. They did what all they can. We are fisherfolk, we won’t be able to go back to work for days, our families will starve. As of now we are sitting in the hospital with not enough money to even buy a packet of milk,” Manimalar said. In the Video the victim asking a series of questions to which Seeman remains silent , not uttering a single word. Enraged Victim challenges Seeman to find a solution for this on going issue if he is a True Tamizhan by heart. Tamils are not respected anywhere around and the police of the Tamilnadu itself killing Tamil people is what worried the victim a lot it seems. Seeman standing still for all the questions raised by the victim. watch the video here and share your thoughts :

Posted by Raghadeepan Ramesh on Wednesday, May 30, 2018

Previous articleThoothukudi Shootout Victim Asks Rajinikanth “Who Are You ??” & The Video Goes Viral !!
Next articleRajinikanth Lost His “Temper” At A Reporter !! : Says Tamilnadu Will Become “Graveyard” If People Keeps On Protesting !!

A video showing senior music director and filmmaker Gangai Amaren abusing an anchor for questioning about the foreword written by his brother Ilayaraja for...