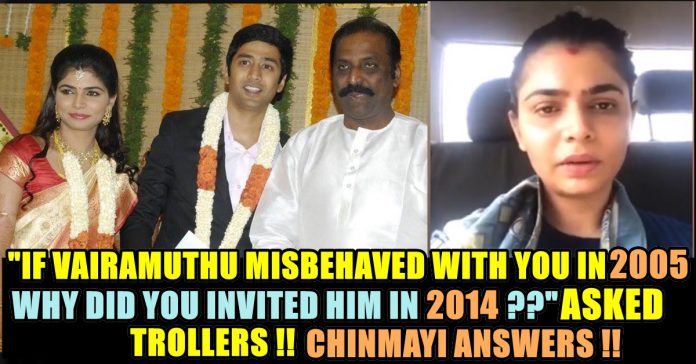 “If Vairamuthu Misbehaved, Why Invited Him For Marriage” Asked Trollers !! Here’s What Chinmayi Has To Say !!

In a series of tweets, Chinmayi explained how the lyricist allegedly harassed and threatened her. Chinmayi said that the incident happened during a music concert in Switzerland. 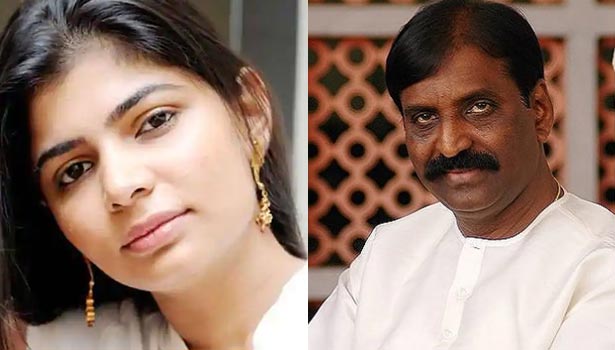 According to Chinmayi, she had been asked by the organiser of the programme to “cooperate” with Vairamuthu and visit him at a hotel in Lucerne. When Chinmayi refused, she was reportedly threatened of serious consequences. Speaking to India Today Television, Chinmayi’s mother T. Padmhasini said the incident took place in 2005 when Chinmayi was part of Veezhamattom, a concert organised by the Srilankan Tamils.

“My daughter was in the initial stage of her career, I wanted to protect her. So, I took up the issue with Vairamuthu’s manager and we demanded to be sent back to India immediately,” she said.

A single parent, Padmhasini raised her daughter and trained her in Carnatic music. Padmhasini says she stands by her daughter’s decision and members of the society should take this movement forward. “I belong to the older generation; if she had consulted me I would have thought twice, but she has taken this decision on her own and I fully stand by her. This has become a great movement. We as members of society should take this up and instill fear in the predators so that they dare not crush our children,” she quipped. Barring a handful of artists, very few from the Kollywood fraternity extended support to Chinmayi. Padmhasini is not surprised at the lack of support. “The industry will be silent. It’s natural because the stakes are high for all of them,” she said.

Now in the most recent facebook live Chinmayi explained everything about the incident she faced. As memes got rounds in social media about why she invited Vairamuthu for her marriage if he had harassed her, Chinmayi answered for that also.

She says 2005 / 2006 He tried to misbehave with her then why she invited #Vairamuthu for her marriage on 2014 ? & Why she Fall on his feet ? Which girl will do this to a sexual predator? No one asked her to fall on his legs #MeToo #MeTooIndia #Metoomovement #Chinmayi #dmk #admk pic.twitter.com/3AXbVnau0u

She also said that victims are not the one who should be ashamed on this matter but the predators should she said.

Chinmayi is basking in the glory of her latest movie 96, where she has crooned for the entire album and dubbed for the female lead.

Previous articleSunny Leone Brutally Trolled For Posing In Bikini !! Hilarious Reactions !!
Next articleInternet To Shut Down Globally For 48 Hours ?? Check Out The Truth Here !!