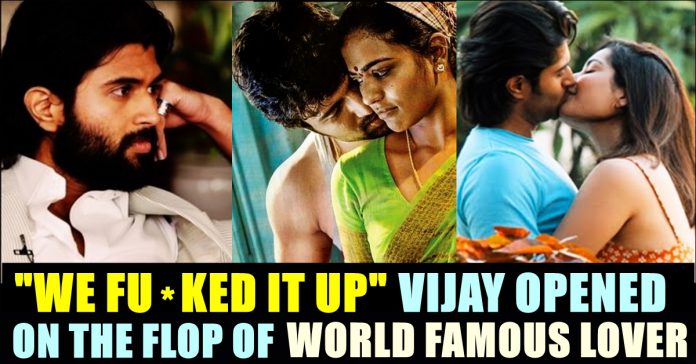 Vijay Devarakonda, one of the most loved and hated star of South Indian film industry, has appeared in a live session with senior journalist Rajeev Masand. Having just acted less than 10 movies, Vijay has a reach nationwide only because of the way he carries himself in his movies. The film “Arjun Reddy” gained him the fame he never expected. The film’s remake version which had Shahid Kapoor in the lead collected more than Rs.350 crores.

After the success of Arjun Reddy, Vijay went on to act in films like “NOTA”, “Dear Comrade”, “World Famous Lover” etc. But they failed to impress the audience as “Arjun Reddy” did. In this recent interview, Vijay Devarakonda opened on why “Dear Comrade” and “World Famous Lover” flopped. The actor while talking about the film he chooses, says that he hates being advised by people.

Vijay said that he said no to many scripts that he liked because they are too different from the form of mainstream story telling. However the 30 year old actor says that he still tries to push scripts he likes. He said that the story telling of his film “Dear Comrade” was something people were not prepared for. “Because the story completely flips in a second” said the actor while explaining why the film failed to impress the commercial audience.

Watch the video below from 14th minute :

In the interaction, Vijay Devarakonda said his family members are spending their time in a cool manner during this lockdown. But the actor says that his family would not have survived this if it happened five years ago. “When you have food to eat and your rents are taken care of, you spend time. But if you are stressing about food or job or paying rent, this lockdown is not fun. I realize if this happened five years back we would be so screwed.” the actor says.

To help the people who are suffering in this lock down, Vijay Devarakonda made two big announcements which is being lauded by the users of social media platforms. He said that he is planning to employ 1 lakh students post the crisis through “The Devarakonda Foundation” (TDF) which he calls as the “Future requirements”. As a solution to “Immediate requirements” Vijay plans to spend Rs.25 lakh to 2000+ middle class families through his website.

Comment your views on this generous gesture of the actor !!