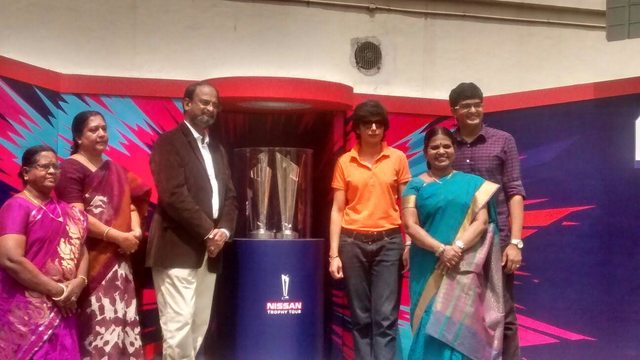 admin
March 6, 2016
Share
Facebook
Twitter
Pinterest
WhatsApp
The World T20 Cup is set to start in India from 11th March. The trophies for this flagship event of ICC for the shortest form of cricket are on a tour of 12 countries. Last Wednesday, on 2nd March the Nissan Trophy tour reached Chennai as fans took the advantage of getting up-and-close with the WT20 trophies. Former India captain Aanjum Chopra was present at the Ethiraj College for Women, Chennai to present the trophy and interact with the cricket enthusiasts. Talking about the tour, ICC Chief Executive David Richardson said: “The Nissan ICC World Twenty20 2016 Trophy Tour has been designed to not only promote the tournament but also to engage with our fans and provide them the first opportunity to get close to the trophy, which will be lifted by the winning captain on 3 April in Kolkata.” Chinmayi Called Out The Interviewer Who Questioned The Viral Girl !!