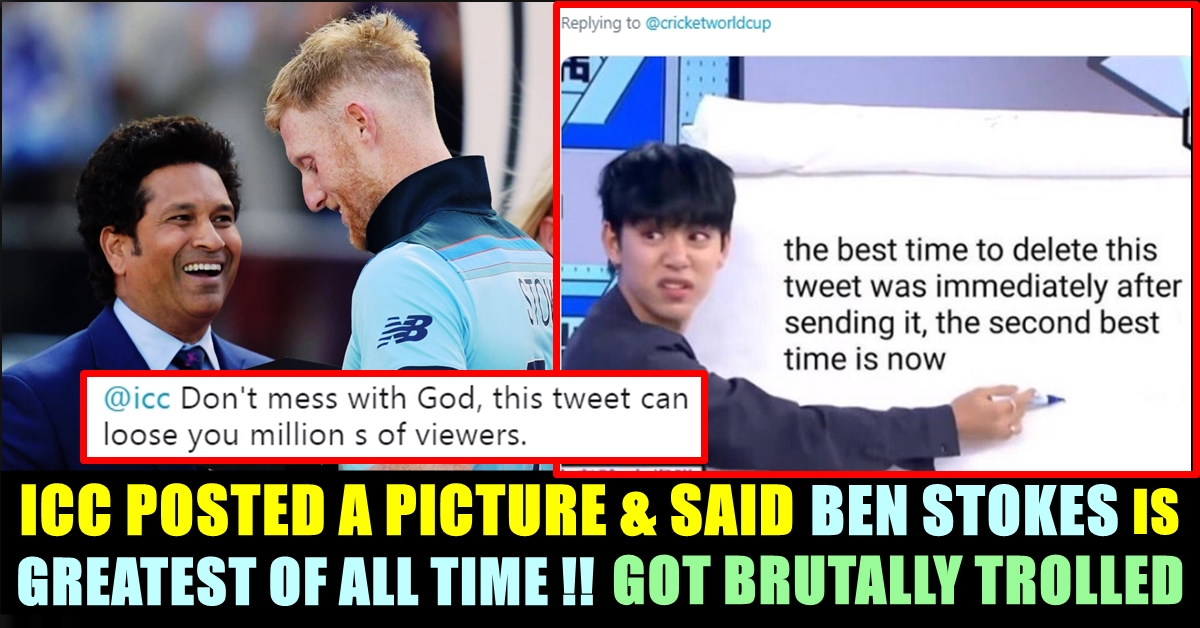 Ben Stokes was born in New Zealand’s Christchurch on June 4, 1991. A little over 28 years later, he played a crucial role for England as the country for his birth suffered a major heartbreak in the final of the 2019 Cricket World Cup.

Ben Stokes, for starters, smashed an unbeaten 84 to steer England’s chase of 242 against the Black Caps. Moreover, Martin Guptill’s throw in the last over of the World Cup final deflected off Stokes’s bat and ran over to the boundary as 6 runs were scored at a key stage. Not surprisingly, Stokes was named man-of-the-match after England won the World Cup despite a tied final and a tied Super Over. The hosts were crowned ODI champions because they scored more boundaries.

Ben stokes received the award from legendary cricketer Sachin Tendulkar in the post match presentation. Posting the picture of both of them cricket world cup’s official twitter account wrote a caption saying “The greatest cricketer of all time – and Sachin Tendulkar 😉”

The greatest cricketer of all time – and Sachin Tendulkar 😉#CWC19Final pic.twitter.com/fQBmfrJoCJ

Yes, someone who couldnt even achieve 20% is a All time great for you? What else to expect from Pakistani Handler.

Yeah and he’s the greatest peaceful person of all time. pic.twitter.com/g4vIsDmCZB

Why did you mention Sachin Tendulkar twice in the caption ?

History made alright. First team to win a World Cup without actually winning

You’re such a “Ben Stokes” @cricketworldcup 😉

This account is hacked by some Paki i bet

Do you even know WHO IS THE GOD OF CRICKET??

And admin you’re one ‘benstokes’ 😄

One And Only G.O.A.T – Sachin Ramesh Tendulkar 😎🔥
Leading Run Scorer Of Two World Cups 😎
The Record Of 673 Is Still Unbroken 😎
Get A Life Admin 😌

Enough jokes already, @cricketworldcup . We still trying to settle with yours ‘who scores the higher number of boundaries – wins’ joke. 🤦🏻‍♂️

Wait ,i dont see either of dhoni,kohli,bradman

Trying to troll a guy who made cricket what it is today.Without him the game would have been as popular as beach volleyball.

@icc Don’t mess with God, this tweet can loose you million s of viewers.