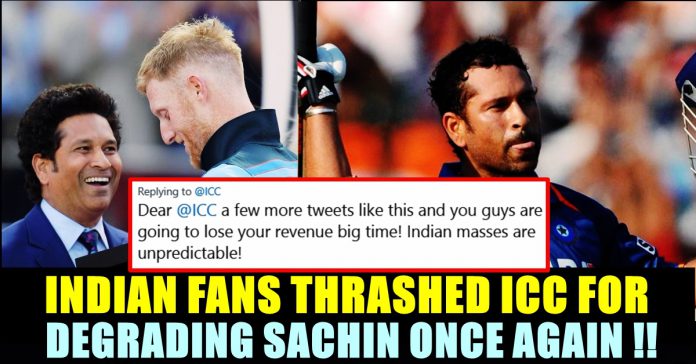 Ben Stokes is currently is in the form of his life. He won the latest Ashes match single handedly for his team which is not so many days after his terrific knock in World cup finals.

Now in an attempt of appreciating the allrounder, The International Cricket Council (ICC) found itself in the middle of a social media outrage for referring Ben Stokes as the ‘greatest cricketer of all time’.

After England were crowned the 50-over world champions for the first time, ICC’s official Twitter handle had posted a picture of Stokes with Tendulkar and captioned it, “The greatest cricketer of all time – and Sachin Tendulkar”. On Wednesday, ICC shared the picture once again with caption, “Told you so”.

On seeing this tweet, Sachin fans who roasted the ICC during the first time, didn’t think of sparing it now as well. They thrashed the Cricket Council left and right with their reply comments.

@ICC Is high on cheap English liquor..Told you so 😉

@ICC why creating haters for Stokes by posting such stupid tweets. Very poor from @ICC

Shall I talk about centuries??

Yes, greatest player who was helped by umpire to become greatest ever and steal world cup

Dude are you like Crazy. Why Not Braithwaite is Greatest hitting 4 sixes in final over to win cup for WI.
Instead of giving Greatest tag, You can use one of the Greatest moments/ Players. And yes Just don't compare.
You will never know how much @sachin_rt has given to cricket.

This admin is tweeting without knowing who the GOD of CRICKET is…….By mocking Tendulkar you are mocking Cricket! Have some cricket facts and sense before you tweet.

I don’t want to curse you for the sin you just committed!

Select Good Umpires who r not blind and partial with white skin. Den we will talk.

Don't want to abuse you but you are an Assho** .

The one tweeting on behalf of this handle wouldn't have born, when Sachin hit his first century.

He is The God of Cricket.

Dear @ICC a few more tweets like this and you guys are going to lose your revenue big time! Indian masses are unpredictable!

Previous articleLyca Productions Finally Opened On The Payment Issues With 2.0 Female Technician !! SHOCKING !!
Next articleBigg Boss Abhirami Posted Pictures Of Her New Photoshoot !! Check This Reply Of Her To This Guy!!

"Rettai Roja" fame Shivani Narayanan who is highly believed to enter the Bigg Boss 4 show as a contestant, has released a statement slamming...