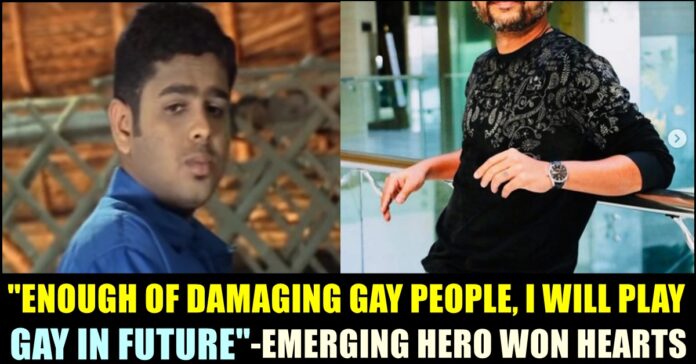 Radio Jockey turned actor RJ Balaji who is currently busy promoting his upcoming film “Veetla Visesham” remake of Bollywood blockbuster “Badhai Ho”, in an interview with film critic Baradwaj Rangan, had said that he is willing to do films that has Gay characters as protagonists. Referring to web series titled “Modern Love”, RJ Balaji said that it moved him emotionally and he is willing to do a film that focuses on Gay characters in future.

“When you are talking about progressive values, would you do a “Shubh Mangal Zyaada Saavdhan” where Ayushmann Khuranna played a gay character?” asked Baradwaj Rangan to RJ Balaji to which the latter replied saying that he loves to.

“I haven’t seen Shubh Mangal Zyaada Saavdhan” but I have watched the first series of Modern Love which shows about a gay couple trying to have a child through surrogacy. While watching the series, I felt so happy and had tears out of happiness as well. It became my favorite series and I am willing to show such aspect of gay relationship ” RJ Balaji elaborated.

“I have friends who are same sex orientation. They are my best friends. They have so much value. For years and years, a taboo has been created around them, referring to them by making wierd noises. I stand for this friend whenever he needs and no one has the value he shows” Balaji further said.

“All these days, my friend was afraid about how his circumstance is going to accept him and slowly he is opening up. It’s not only about him, so many boys and girls are reluctant about not being proud at least but about opening up to others about their emotions” the LKG actor said.

Balaji also said that it is important to make such films as Tamil cinema has stereotyped the gay relationships by showing not so right things on screen. The emerging star also felt that he is just starting his career as an actor and he would definitely do a film on the values of Gay relationships after achieving a place. “When people believe me and my contents thinking whatever I say would be right, I will do such film” Balaji said in the interview with the film critic.

Balaji’s statement received huge amount of positive reactions from the online users. “On account of #PrideMonth it is refreshing to see @RJ_Balaji be this beacon of hope, wanting to break the stereotypes of LGBTQ people portrayal in Tamil films and calling out our retro commercial cinema for disrespecting them” a twitter user said by sharing the video with many others making similar comments.

On account of #PrideMonth it is refreshing to see @RJ_Balaji be this beacon of hope, wanting to break the stereotypes of LGBTQ people portrayal in Tamil films and calling out our retro commercial cinema for disrespecting them. #VeetlaVishesham pic.twitter.com/a1Ni9t6knA

@RJ_Balaji As you mentioned “Gay Couple wanting to have a Surrogate Child” please check on Dads.of.Meenakshi in Instagram. They’re real life Gay Couple with an adopted girl child. They’re lovely as a fam 😍❤️ https://t.co/d0dOyei9eh

Actor Soori, one of the busiest Comedian of Kollywood is currently waiting for the release of “Seema raja” on Vinayagar Chaturthi. Siva Karthikeyan pairs...

It is a known fact that Jallikattu and Bigg Boss sensation Julie is playing the lead in the film, 'Amman Thayee', a film based...

Chennai Super Kings were not very consistent with the bat right through the tournament and their opener Shane Watson could not find his groove....