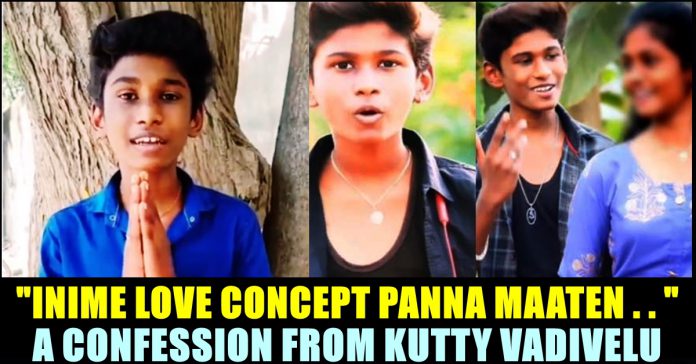 Kutty Vadivelu who rose to fame among Internet audience through his reel videos in Instagram, released a video apologizing to the public for involving in making romantic videos with a teen girl. Vadivelu assured that he won’t be making any kind of romantic videos hereafter and wanted kids of his age not to get involved in making such videos. He also wanted people to support him for the talent he displays in his Instagram space.

Lately, a news on Officials of child welfare organisations rescuing the 16 year old girl and sending her to Children’s home, emerged. She who belongs to the Melpattambakkam of Nellikuppam, Kadalur, reportedly fell in love with the boy after connecting with him through social media. The duo started doing videos together to gain fame in social media with the consent of their parents.

As soon as their videos went viral in social media platforms, social activists registered a complaint in Kadalur Children Welfare office. Officials of Children safety reached the girl’s house along with women police officers of Panruti station and conducted an inquiry, says reports. It is reported that they rescued the girl and sent her to the Kadalur Children care centre.

Now, a video of the boy apologizing to the public got released in social media platforms. “Many trolls are being made based on the videos we made in Instagram. I want to apologize to everyone for that. I won’t be uploading any kind of love based videos in my account hereafter. I will only concentrate on nurturing my talent and people can support me if they like. We both faced issues for making such love based videos. I don’t want kinds to follow us. I want this to end with us” Vadivellu said in the video.

Meanwhile, a video of the girl confessing that she won’t do duet videos in Instagram got surfaced in Internet. “I did it to gain trend in Internet without knowing about the consequences. Now, I am struggling a lot. Many children of my age are getting influenced and wants to do videos like me. I have made it by mistake but I don’t want other children to commit the same. Please don’t get involved in such things. I won’t upload videos in Instagram hereafter.” she said in the video.

For past few days, a number of videos of the duo were trending in social media platforms. One of the videos showed the boy feeling upset and getting consoled by his mother and the girl. It is said that the Instagram account of the boy got hacked and his mother could be heard calling the girl as “Marumagale” (Daughter-in-law). The girl calls his mother back as “Aththa” (Mother-in-law).

As soon as the video went viral in social media platforms, other older videos of the duo started flooding in the feeds in which they could be seen recreating the romantic songs of Tamil cinema. Several, memes, trolls, jokes and criticism were made targeting the duo.

Previous articleTwo More MNM Officials Left The Party !! Check Reasons
Next article“I Did It With My Own Money” – Vijay Vasanth’s Reply Garnered Attention

Actor Sanjeev Karthick, husband of Television actress Alya Manasa, came up with a story in his official Instagram handle to clear the air about...