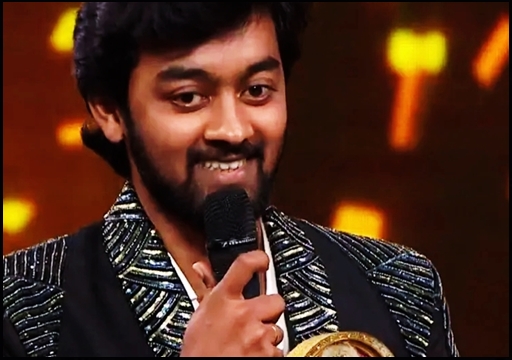 Raju who became the winner of Bigg Boss season 5 started appearing for youtube interviews. The upcoming star who is currently spending his 7 days quarantine period, said that it feels so overwhelming for him as he expected a very little from his Bigg Boss participation but ended up gaining a lot. He said that many production houses has started calling him after winning the Bigg Boss title and he is yet to choose what to do and what not to. When the host asked Raju what gift he will give to his wife for winning the title, he replied saying that he will give her the entire 50 lakh of cash prize to her as she took care of him when he had nothing.

Raju Jayamohan of “Kana Kaanum Kalangal” fame has been crowned as the winner of Bigg Boss season 5 after he received highest number of votes from the viewers of the cash rich show. Priyanka Deshpane who has been hosting shows for Vijay TV for past few years, has been declared as the first runner while Pavni who rose to fame acting in “Chinna Thambi” serial of the same channel grabbing the third spot. Amir, a popular dance who predominantly works for Vijay Television has been named as the fourth finalist with Niroop ending up in 5th place.

It was announced that Raju who won the reality game show is going to be awarded with a cash prize of Rs. 50 lakh by the Bigg Boss makers. The aspiring filmmaker and actor was already getting paid Rs. 1.50 lakh per week, according to reports. In total, along with Rs. 21 lakh for 15 weeks of stay inside the Bigg Boss house, Raju is going back home with a sum of Rs. 71 lakh. He has to pay 30 percent of the total income as tax, according to reports.

Now, after winning the show, he is busy giving interviews for various youtube channels. In his interview with Galatta youtube channel, Raju said that his wife Tharika would always tell him to be consistent. “She would always use the phrase “consistency is the key” and I would make fun of it. We are being in a relationship since 2012 and have talked a lot about improving in life” Raju said.

“You have won Rs 50 lakh as the title money. What would you like to gift for Tharika ?” asked the anchor to Raju and the aspiring filmmaker said that he would give her the entire amount. “I would give all the 50 lakh of money to her. What’s there to buy and give ? She never asked me anything ever since we fell in love. She is the one who took care of me so far. Starting from buying me a shirt, shoes and to do different kind of hairstyles, she done a lot of things to me” Raju said. “She likes only simple things like visiting a beautiful place, going for a car drive and visiting temple like that. If I have to buy something that she likes, I have to think” he added.

Previous article“It’s Just A Family Quarrel !!” – Dhanush & Aishwarya To Reunite ??
Next articleFilm Actor Got Thrashed For His Comment On Jallikattu Winners Getting Car As Prize !!

Raghava Lawrence Responded To The Hatred He Is Receiving !!

Darbar audio launch took place at Nehru stadium, Chennai recently. The show was hosted by the makers of the film which includes Superstar Rajinikanth,...