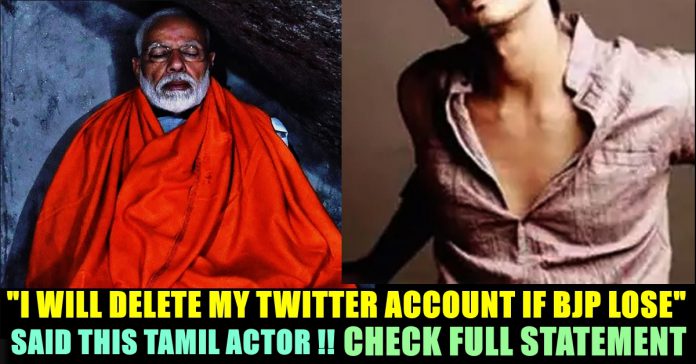 India’s longest election is heading towards the grand finale. The fate of over 8,000 candidates who contested in 542 constituencies is expected to be declared on May 23.

The actor now came up with a series of tweets regarding the election results. The whole of India is looking at Bharatiya Janata Party (BJP) leading by a huge margin in the recently-concluded election. Siddharth, who is famous for his sarcastic remarks said that he’d go off Twitter if Modi doesn’t come back to power this year.

I hereby solemnly swear that if @narendramodi ji does not get a second term, I will delete my Twitter account permanently. Jai Hind. #AayegaToModiHi

Siddharth has been quite critical of Narendra Modi’s governance in the last five years and has been sharing his opinion on several topics including demonitisation, GST. Apart from criticising Modi, Siddharth also came down heavily on the biopic based on his life.

Check out some of the other tweets of him that took place in his official twitter timeline :

As expected #BJP is burying the #Congress in the most humiliating fashion. Cakewalk for the ruling government without a credible opposition. Monumental turn in #WestBengal history in particular. The voter is speaking loud and clear. #India #Democracy

#TamilNadu is speaking in its own unique voice. Incredible anti #AIADMK wave. The #DMK has fought a disciplined campaign and the state and its future will remain in the hands of its own. This paves the way for stability following the last few years of total chaos in our state.

#EVMHacking and other such childish excuses should be kept aside. There may not have been a working #ElectionCommission or opposition, but the election process works and one must respect the mandate of the people. #BJP and #Modi have made a winning habit. #IndianElections2019

If #PragyaThakur wins and #Atishi loses in their respective contests, it is a clear sign where our priorities lie. How’s the hate? Great sir!

#Congress should consider changing their team name like #DelhiDaredevils. There are only so many thrashings under an incapable leader and self goals that any party can take. Is the grand old party of Independent India on its death bed? #IndianElections2019