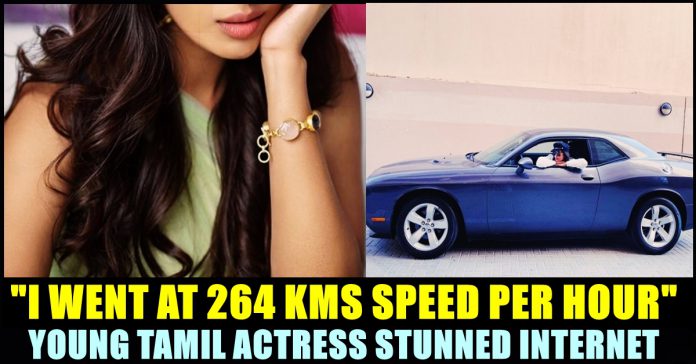 Tamil actress Nivetha Pethuraj conducted a chat session with her Instagram followers about race and said that the highest speed she gone off the track was 264 kilometre per hour while answering to one of her followers. On the race track, she went for 180 KMPH maximum, according to the answer she provided to the follower. Nivetha Pethuraj has been pretty much expressive about her interest in car racing for past few days through her official Instagram handle and conducted a chat session with her followers about race on Wednesday.

Nivetha Pethuraj has completed the first level of formula race car training program conducted by Momentum School of advance racing. The actress, to the media, said that her interest towards car race started during her school days, while she was studying 8th standard. In the year 2015, the actress bought a Dodge Challenger Sports car and she was the second girl in UAE to buy it. Despite of her father’s concern, the actress felt confident and drove the vehicle that contains V16 engine which has a faster racing power.

She who is thinking of participating in the championships in future, recently uploaded a couple of videos in her Instagram space which showed herself doing a lap. “A vision to visual. Metaphorically speaking, when you hit the limiter hold the clutch, upshift and throttle the f* on..”, “Another vision.. Another dream.. Another life” read the captions of her recent posts. Check out them below :

Recently, when she conducted a chat session with her Instagram followers, a follower asked to tell how much speed she will go. Replying to him, Nivetha said “In the race track, I think the maximum I have gone must be like 180 but off track I have been 264 I guess”

Another follower asked her to tell something about actor Ajith kumar’s car race. “I have definitely seen few of his races. He has gone to the Formula 2 which is a big deal. So yeah, I think he is really cool” Nivetha said.

Check out some of the other answers she provided to her followers below :

Nivetha Pethuraj is one of the many emerging actresses who is very much active in social media platforms. The actress who is known for appearing in “Oru Naal Koothu”, “Tik Tik Tik”, “Pothuvaga en manasu Thangam” films has a separate fan base in social media platforms where she lets her followers know about her daily routines, film updates etc. On her cinema career front, Nivetha is expected to appear in “Pon Manickavel”, “Party” etc.

Previous articleVijay Fan Shanthanu Deleted His Tweet About Ajith After Receiving Hatred !!
Next articleHow Much Tax Was Actually Demanded From Actor Vijay ?? WATCH

Standup comedian Madhurai Muthu who is known for his stints in Sun TV and Vijay TV, came up with an emotional post on Friday,...

Mahendra Singh Dhoni commonly known as MS Dhoni is an Indian international cricketer who captained the Indian national team in limited-overs formats from 2007 to 2016 and in Test...