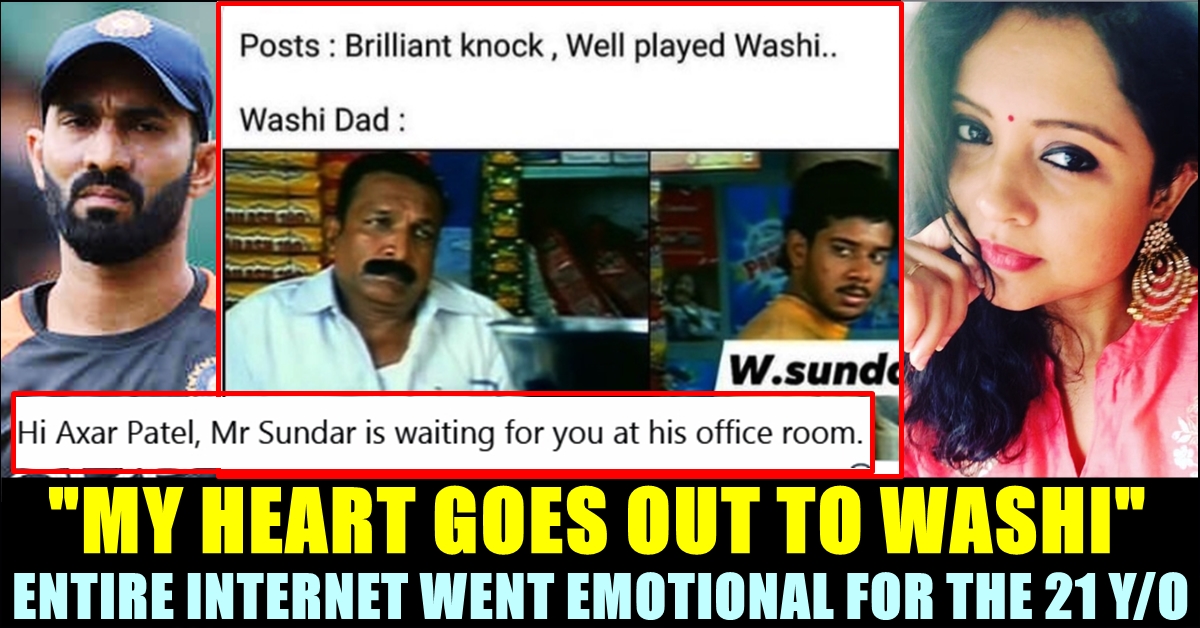 Washington Sundar, once again missed to score a century and this time, it is even more heart breaking comparing to the previous occasion in Chennai where the cricketer scored 85 and went unbeaten. The cricketer was at the non striker’s end at 96* when team India got all out for 365 runs. In the over bowled by Ben Stokes, both Ishanth Sharma and Mohammad Shami got out with out scoring a single run.

After Axar Patel’s dismissal, Stokes hastened India’s tail enders trapping Ishant Sharma lbw for a first-ball duck and then cleaning up Mohammed Siraj for a duck as well. The Chennai based youth smashed 10 fours and 1 six in his 96 and was stranded at the non-striker’s end when Siraj departed.

Users of social media platforms came up with tweets expressing their emotions over the youngster missing his century. “Oh noooo. Heart goes out to Washi. Well played!” said Prithi Ashwin after seeing the team getting all out leaving the 21 year old alone whereas former cricketer Russel Arnold said “how unlucky is that .. what a brilliant knock #indveng 3 wickets in 5 balls and he didn’t get to face a single delivery .. this guys knows to make tough runs”

Check out some such reactions below :

Oh @Sundarwashi5, wasn't to be but very well played. There will be more centuries. It was batting of the highest class.

Oh dear @Sundarwashi5 🤦🏻‍♂️🤦🏻‍♂️ how unlucky is that .. what a brilliant knock #indveng 3 wickets in 5 balls and he didn’t get to face a single delivery .. this guys knows to make tough runs 👏👏👏

First Test Match hundreds are so special for any player 😊
Watching @Sundarwashi5 miss out on a deserved 💯 is disappointing for sure but the way he has played suggests he will have many more opportunities in the years to come 👊 Well played Washi
.#INDvsENG #rcb

Got to feel for @Sundarwashi5. It was a fantastic innings! The composure and skill you have shown in this game i am quite sure you will get to 3 figures very soon. #INDvENG

Mann you gotta feel sad for washi 🙁
What a well deserved hundred it would have been. #INDvsENG @Sundarwashi5

Feel for Washington Sundar, unbeaten on 96 from 174 balls including 10 fours and 1 six – missed out his maiden hundred by 4 runs as India has been all-out for 365 runs in first innings. Painful end to a great knock under pressure. pic.twitter.com/UyKeBAVRfM

Washing'TON' Sundar
I was waiting to write this…but it's okay, I'm sure I'll use this very soon!
Fabulous knock @Sundarwashi5 👌🏻#INDvENG pic.twitter.com/ugnEsVUOzh

Hi Axar Patel, Mr Sundar is waiting for you at his office room.

#INDvsEND
Sundar's Father, his uncle and Sundar going to Axar Patel, Ishant Sharma and Siraj's house after the match: pic.twitter.com/kwCMsNljX8

Feel for you @Sundarwashi5 ! Keep batting like this & you are going to score a lot of tons in test cricket! A superb match winning knock for #TeamIndia ! #INDvsENG #ENGvIND pic.twitter.com/vQeuk5Ox2I

The speed of meme boys amazing. And again, on point with reference. 😂😂😂 pic.twitter.com/2zvJ1JDvKD

After Sundar scored 62 in his debut match against Australia, reports emerged saying that Sundar’s father was disappointed over his son for not converting his half century intto a century.

“I am disappointed he did not get a 100. When Siraj came, he should have hit fours and sixes. He is capable of that. He should have gone for sixes. He could have gone for pulls and big hits. Perhaps, he thought of trying to come close to Australia’s total as the lead was very less,” said the senior Sundar to media and added that his son is the youngest player to score century in the first division league. “He is naturally a opening batsman and scored lots of runs against new ball. At the age of 14, he scored century while opening” he said at the time.