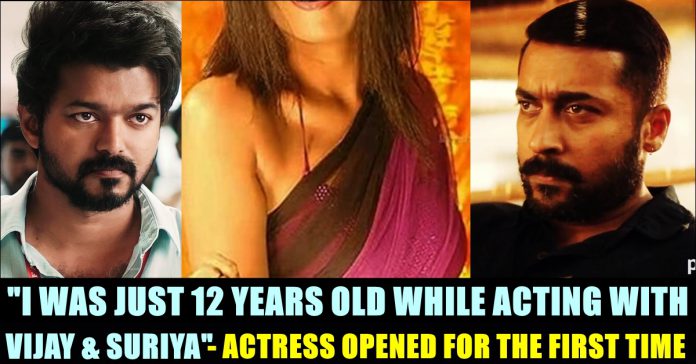 Actress Abinaya who played a notable role in Vijay-Suriya starrer “Friends” appeared for an interaction with a private youtube channel and revealed that she was just 12 years old while acting in the film. The film which became a blockbuster during its release time, acted as a break in the career of both the top actors.

The film “Friends” starred Vijay, Suriya, and Ramesh Khanna in lead roles, while Devayani, Vijayalakshmi, Abhinayashree, Vadivelu, and Radha Ravi played the supporting roles. The music was composed by Ilaiyaraaja. It was released on 14 January 2001 and completed a 175-day theatrical run at the box office. This film also marked the second collaboration of Vijay and Suriya after Nerrukku Ner. The comedy scenes of Vadivelu in the film are still trending in the internet with netizens celebrating it.

Now, actress Abhinaya who played the role of a teenage girl in the film, appeared in an interaction with a youtube channel and shared about many interesting incidents that took place during the shooting of “Friends”. “I am revealing it now in public. I was just entering my 13th year after completing 12 years of age during that film” Abhinaya gave shock to the fans.

“I was too young and wasn’t aware of many things.” said Abhinaya and revealed that she was playing the streets when the makers of “Friends” started producing the film. She said that the production house of “Friends” was located in her street where she was playing and the manager of the film saw her and inquired about her to cast her in “Friends”.

“After knowing that I am a daughter of actress Anuradha, they came to my house and approached me to act in their film. Initially my mother denied it reasoning my education but it is me who insisted on acting with Vijay and Suriya” Abhinaya said.

“I acted in the film after four or five months of my puberty. Many people think that I am too old. I want them to know that I am young.” Abhinaya said. Further, Abhinaya shared about her experience in making her debut with senior actors such as Dhevayani, Radha Ravi, Vadivelu, Suriya, Vijay and others.

After “Friends”, Abhinaya received a breakthrough in her career after featuring alongside Allu Arjun in the 2004 Telugu film Arya in an item number for the song “Aa Ante Amalapuram”. She played her first lead role in the 2005 Telugu comedy Hungama appearing alongside Ali and Venu Madhav. Her role in Prabhu Deva-Jyothika’s “123” also garnered wide reach among the audience.

After Police officials arrested 24 people for attacking a junior doctor, after the death of a patient in Assam, four more people got arrested...