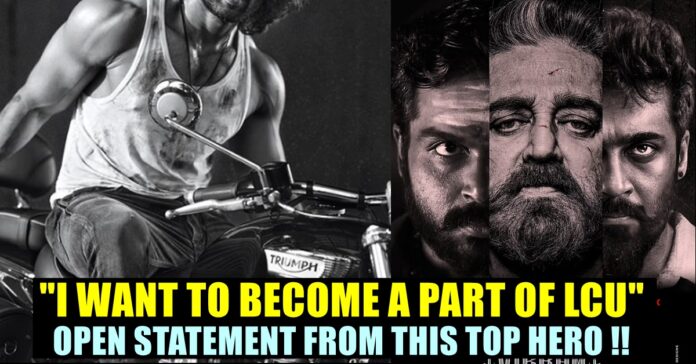 During the promotions for his upcoming film “Liger”, young and emerging hero Vijay Devarakonda who is being considered as one of the bankable stars of south Indian film industry, expressed his wish of becoming a part of “Lokesh Cinematic Universe”. The actor landed in Chennai to promote the film on Saturday and said that he hopes for the collaboration to happen soon. Vijay also named filmmakers such as Pa. Ranjith, Vetri Maaran and expressed his wish of working with them in future.

“Liger” is one of the most awaited films of the “Arjun Reddy” actor in which he is going to play the role of an MMA fighter who goes on to win his matches. Known for his films that involves romance and violence, Vijay is expected to rock in the never seen before Avatar of him. Along with Vijay Devarakonda, the film stars Ananya Pandey, former boxing champion Mike Tyson and others. The film is directed by Puri Jagannath of “Pokkiri” and “Temper” fame.

The makers have announced the release date of the film as 25th of August, 2022. “Liger” which was originally made in Telugu is going to have its  Tamil, Kannada, Malayalam and Hindi versions as well. The film which is making noise ever since it’s announcement, is expected to be the next Pan Indian blockbuster.

To promote the film in Chennai, Tamil nadu, Vijay Devarakonda and Ananya Panday landed in Chennai on Saturday and interacted with the press reporters. Talking about working in direct Tamil movies, Vijay Devarakonda said “I look forward to work with Lokesh Kanagaraj, I really like him. I like Vetri Maaran sir, Pa Ranjith. I really like these directors and I have spoken to all of them on the phone. So when a good director I like comes to me again, I will definitely do a film here”

“Till then, I am doing films and dubbing them to release in Tamil” Vijay said and went on to express his wish about getting included in LCU, The Lokesh Cinematic Universe. “I am waiting for the day when Lokesh comes with his universe to me. I feel like it will happen” said Vijay and smiled.

Lokesh cinematic universe is nothing but the franchise created by the filmmaker through his recently released “Vikram”. In the Kamal Haasan starrer, Lokesh brought the characters such as Bejoy, Dilli, Anbu from “Kaithi” universe and linked both to avoid telling back stories for some of the characters. The film “Vikram” ended with “Rolex” played by Suriya entering the universe and demanding the death of Amar (Fahadh), Vikram (Kamal) and Dilli (Karthi) for destroying his drugs.

Vijay Devarakonda must have heard about the universe of the filmmaker as the film became a huge blockbuster collecting more Rs. 500 crore globally. Let’s wait and see if Lokesh responds to the wish of Vijay and writes a character for him in his franchise which is expected to have several parts in the future.

Previous articleNetizens Lauding Mother For Bravely Saving Her Child From A Huge Snake !! WATCH
Next articleBJPians Threw Slipper At The Car Of TN FM PTR !! 5 Arrested

Probably The Only Actor To Talk About Pollachi Case On This Important Day !!

On the day, the rapists of Nirbhaya case got hanged, many people expressed their thoughts and opinions. Few of them regretted the way Pollachi...