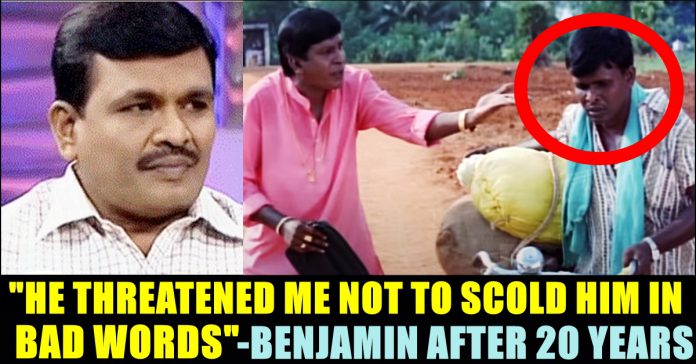 Vadivelu is not just a name among Tamil meme nation but an emotion. Being one of the celebrated comedian among Tamil audience, Vadivelu has worked in more than 200 films as a comedian and as a lead actor. He became an integral part in the daily lives of people with the emergence of social media from the early 2010s. Most of the memes were created with relevance to his popular comedy clippings, thanks to his natural acting and his unique skill of relating with people’s emotions through his expressions.

Starting as a sidekick to the famed Goundamani-Senthil comedy duo, Vadivelu rose to prominence after his role in Kadhalan, a Shankar directorial. Above his ability of making people laugh effortlessly, Vadivelu is one a best actor Tamil cinema ever had. Now, to our shock, actor Benjamin who worked as Vijay’s friend in Thiruppachi, appeared in an youtube interview and explained about a shooting spot experience he had with Vadivelu almost 20 years ago.

Benjamin made his acting debut through Cheran’s “Vettri Kodikattu” as a relative of actor Vadivelu. He appeared in just one scene in the film and it made a big impact among the audience as it is widely being used as a meme template even today. Director Cheran who saw Benjamin’s acting in a drama, contacted him and asked him to do a role in his film. Now, after 20 years, Benjamin recollected how Vadivelu did every possible thing to stop him acting his part successfully.

Benjamin who went to the shooting spot after receiving a call from Cheran, waited 18 days in the location by doing nothing for Vadivelu to come. When he decided to leave the shooting spot, Cheran explained him the situation and asked him to wait till Vadivelu’s arrival. Vadivelu who saw Benjamin for the first time, asked him to act well and repeatedly told him not to be afraid.

“When Cheran sir asked me to act the scene in single take to restrict the budget, I confidently said “Yes” to him. Vadivelu sir who thought that I am showing attitude, asked me how I would act the scene. I said that I came from Balachander school and would act any scene, in front of anyone with ease” Benjamin said in the interaction.

“While acting the scene, I did everything perfectly but stopped when I had to scold Vadivelu in bad words. This happened repeatedly that I wasted Rs.60,000 of production cost. When director came to me and asked what stops me from scolding him in bad words, I told him about what Vadivelu did when he was not in the frame.” said Benjamin who further revealed that Vadivelu warned him not to scold him in bad words through his facial expressions.

At one point, actor Parthiban intervened and sent Vadivelu away for a car ride and asked Benjamin to scold by seeing camera imagining Vadivelu. “However I struggled to utter bad words initially but successfully did it after Parthiban sir’s demonstration.” Benjamin said. After completing the scene, Vadivelu came and threatened me. Parthiban sir and Cheran sir asked him to leave me alone.

However, while dubbing for the film, Vadivelu asked Cheran to trim the scolding scenes of Benjamin but it is director Cheran who convinced vadivelu by pleading. “That scene help me to gain face recognition among the audience.After that film released, I even went to france through flight” Benjamin added.

Tamil nadu fans who watched "Poniyin Selvan" started making fun of the "larger than life" scenes that took place in "Bahubali" movie which is...