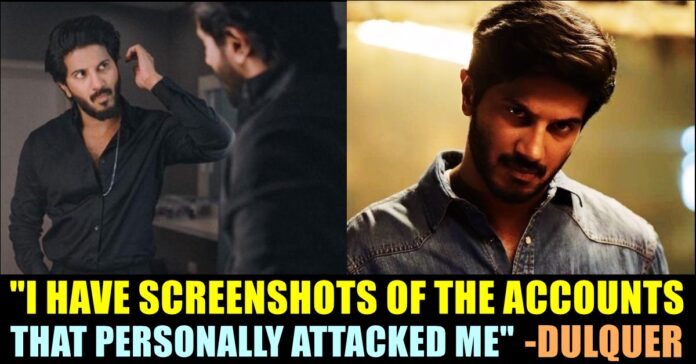 Actor Dulquer Salmaan who is currently basking in the success of his recently released romantic film “Sita Ramam”, opened about how he handles with criticisms and attacks that are being made against him on online platforms. The actor said, irrespective of what the platform is, he is taking screenshot of all the comments and opinion and often seeing them. Te actor also said that he remembers the accounts that made such comments.

The busy actor, in an interview with Prabhat Kabhar, said that he has read about Bollywood actor Abhishek Bachchan pasting paper cutting of his own criticism on his mirror. “If I talk about myself, if you search on my phone, you will find screenshots of comments that personally attack me. I save those and even look at them from time to time. Twitter, Instagram, Youtube, I save them all. I remember the IDs of all those who attack me” the actor said in the interaction.

Dulquer who was last seen in “Sita Ramam”, a straight Telugu film is all set to be appeared in a direct Hindi film titled “Chup Revenge of the Artist”, directed by Balki. The film which has Sunny Deol, Pooja Bhatt, Shreya Dhanwanthari in the supporting roles, will be releasing in theatres from 23rd of September.

Touted to be psychopath romantic thriller, the film is being pegged as a homage to yesteryear filmmaker Guru Dutt and his film Kaagaz Ke Phool. The most expected film also marks legendary actor Amitabh Bhachchan’s debut as a music composer.

Making his debut as an actor through a film named “Second show”, DQ went on to act in films such as Ustad hotel, ABCD, Bangalore Days etc. “Vaayai Moodi Pesavum”, “Mahanathi”, “Karwaan” became his Tamil, Telugu and Hindi debuts respectively. Salmaan has been recognised in the media as a fashion icon and an auto enthusiast. He owns several entrepreneurship ventures and promotes various social causes. The emerging actor  also founded a film production company in the name “Wayfarer Films”.

Previous article“Am I A Thief Or Murderer” – Ajithkumar’s Video Is Trending !!
Next articleHaters Mocked Vijay Saying That He Used “Wig” In The Recent Viral Selfie !! Here’s How Vijay Fans Replied