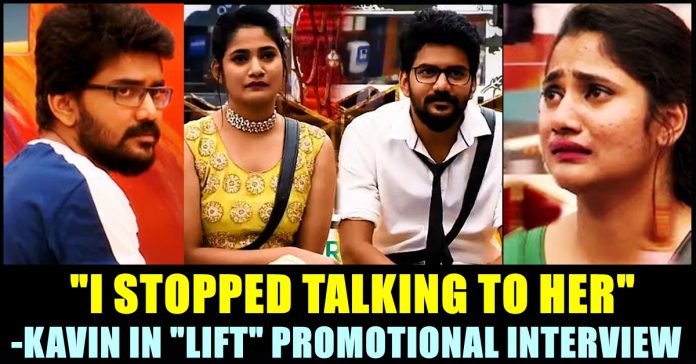 In a recent promotional interview that took place for his recently released film “Lift”, Kavin said that he stopped talking with Losliya with whom he had a strong bonding during his Bigg Boss stint. In the interview, Kavin shared about how he got committed into the project “Life” after coming out of the Bigg Boss house. The actor said that the script impressed him as it had all the essence for a horror film. The emerging actor said that the fact about the entire film taking place within one night impressed him. He also opened about his role in Vijay’s upcoming film “Beast”.

Though Mugen won the title of the third season of the Bigg Boss show, the trending topic throughout the show was Kavin and Losliya who were highly believed to have a romantic relationship between them. The way they behaved throughout the 100 days in the Bigg Boss house became one of the main reasons for fans starting fan pages in the name of “Kavliya” and all. When Kavin evicted himself in the 95th day, Losliya couldn’t tolerate the pain and kept her hand in between the door to make him stop from going.

Kavin, for his part, said to the newsreader that he will be waiting for her from outside. He even wished her to win the title and there is a belief that Kavin evicted himself only to make Losliya win by influencing his followers to vote for Losliya in the final week. The episode of Losliya’s father expressing his disappointment over Losliya for involving in an affair with the actor went extremely viral as well.

In 2019, Kavin who appeared in an interview with Chennai times for winning the most desirable man of 2019 award, has clearly mentioned that he is still single and is not involved in any kind of relationship with any one currently. The actor also avoided talking about Losliya throughout the interview. He didn’t even mention Losliya as his co-contestant which left the army memmbers of KavLiya in tears. On the other hand, Losliya also informed the Chennai Times that she is single now.

While talking about his role in “Beast”, Kavin said that he is not a proper assistant director but took part in the pre production process as director Nelson Dileepkumar is like a brother to him. “I know Neslon anna for more than 10 years and he would always throw ideas to us during normal discussion” Kavin said.

Previous articleSuruthi’s “Goddess Lakshmi” Photo Goes Viral In Internet After She Shared About Her Dark Past !!
Next articleTrolls Attacking Mumbai Indians Flooding In Internet !!

In the recently shot "Neeya Naaa" show which was a debate between Students and Teachers, a female student who most probably belongs to the...

Unlike other female contestants of Bigg Boss reality game show, Losliya became pretty much busy by committing projects as female lead in some of...