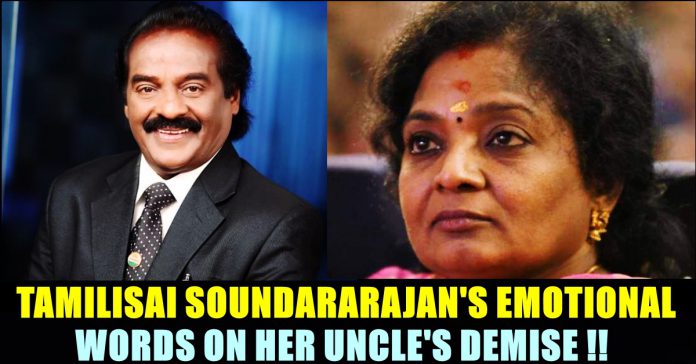 Tamilisai Soundararajan who is currently serving as the governor of Telangana, released a press note expressing her grief regarding her uncle Vasantha kumar’s demise. The former Tamil Nadu State Unit President of the BJP is the daughter of Vasanthakumar’s elder brother Kumari Ananthan, a former Member of Parliament and senior congress party leader in Tamil Nadu. She, in her press note, said that regrets his demise not as a governor but as niece.

H. Vasantha kumar, Tamilnadu member of Parliament from Kanyakumari and a popular business man succumbed to COVID 19 on August 28 after combatting the virus for three consecutive weeks. He who was admitted in Chennai’s Apollo hospital, passed away on Friday at 7 : 07 PM. The veteran businessman was admitted on 10th of August after developing symptoms for COVID 19 virus, was 70 year old when he left the world.

Vasanthakumar is known for initiating Tamil nadu’s biggest appliances retail chain Vasanth and Co. He started his business career as a salesman during seventies. He who got elected as MLA for two times from Nanguneri constituency in 2006 and 2016, resigned from his seat after successfully contesting from Kanyakumari Parliamentary constituency in the 2019 Lok Sabha election. He defeated the sitting MP and then Union minister Pon Radhakrishnan by a huge margin. His Vasanth & Co grew to be a household name in the state with almost 90 showrooms across Tamil nadu and Pudhucherry. He also ran a TV channel Vasanth and Co.

Entire country including Prime minister Modi posted tweet paying condolence to the veteran. Now, Tamilisai Soundararajan, in her press release, recollected the fond memories from her childhood. “My heart is not accepting your demise. Since my childhood we were together till his marriage. My father Kumari Ananthan’s political impact made us travel in different paths” she said in her post.

“Due to the party difference, there was no compatibility between us but we were affectionate to each other as we were same blood. I observed his agility from far and admired him a lot.” said Tamilisai who got emotional while saying that she could remember the memories of them sitting and eating together in childhood.

“My heart aches on realizing that the charity you provided by giving job opportunities to many by creating an empire named as Vasanth and Co didn’t save you. Though I try to control my tears, it rolls down like a river. Though I am a governor, crying as a nience now” she wrote in her post.

As soon as the news on the veteran businessman’s demise surfaced, Prime minister Modi posted a tweet writing “Saddened by the demise of Lok Sabha MP Shri H. Vasanthakumar Ji. His strides in business and social service efforts were noteworthy. During my interactions with him, I always saw his passion towards Tamil Nadu’s progress. Condolences to his family and supporters. Om Shanti.”

Saddened by the demise of Lok Sabha MP Shri H. Vasanthakumar Ji. His strides in business and social service efforts were noteworthy. During my interactions with him, I always saw his passion towards Tamil Nadu’s progress. Condolences to his family and supporters. Om Shanti. pic.twitter.com/SmuAK8ufAx