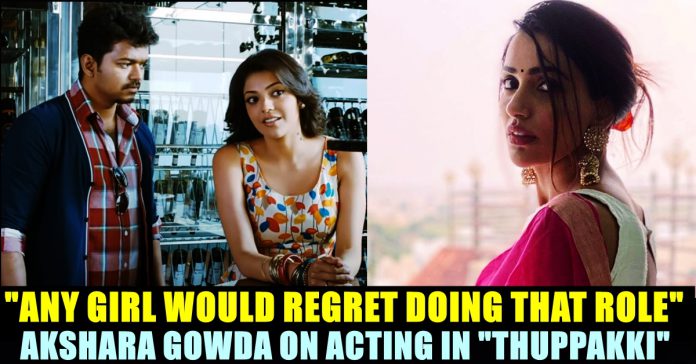 Thuppakki, a film which is a biggest break for both Vijay and A.R Murugadoss, widely appreciated by the critics and by the audience for its engaging screenplay and unexpected climax during its release time. Vijay’s new look and the way he carried himself as “Jagdish”, an army man and a specialist in DIA (Defence Intelligence Agency) impressed his fans and they are eagerly waiting for the sequel of it.

The film which was directed by A.R Murugadoss, had actress Kajal Agarwal as female lead. While Vidyut Jamwal played as the antagonist, Sathyan and Jayaram appeared in supporting roles. Actress Akshara Gowda also played a minor role in the film. Harris Jayaraj composed music for the film whereas Santhosh Sivan cranked the camera. The editing process was handled by ace editor Sreekar Prasad and the film was bankrolled by Kalaipuli. S. Dhanu.

The film’s plot revolves around Jagdish destroying the sleeper cells of our country with his brilliance and with the help of a limited crew of paralyzed army members who served the nation once. Now, after 9 long years, actress Akshara Gowda who did a role that lasts less than 5 minutes in the film, has said that she regrets for acting in the film. She who did a role named as “Shweta” in the film, would be dubbed as “matter” by Kajal Agarwal.

Talking about the role in a recent interaction with Behindwoods youtube channel, Akshara said “The only good thing about that film was Thalapathy, A.R Murugadoss and Santhosh Sivan. Otherwise what role I did ??” she said in the interaction. “I regret only for playing that role. Not for with whom I shot.” she added. Akshara also said that any girl would regret it.

When she was asked whether she was informed about the role prior, Akshara said that the explanation was completely different to be honest. “They said it was a friend role of Kajal Agarwal. Later they couldn’t shoot or whatever. I regret it. Doesn’t matter. I was new. I didn’t know how it works.” said Akshara who added that she is ready to work with them even today.

Akshara went on to share about many other experiences of her in film industry. After Thuppakki, Akshara appeared in Ajith Kumar’s Aarambam and received wide recognition through “Stylish Tamizhachi” song. Akshara also regretted for studying a 2 years filmmaking course after “Aarambam” which she thinks as unnecessary now. “If I would have avoided that, my could have grown in a different way” she said. She went on to work in several other south Indian films. Trivikarma in Kannada and Soorpanagai in Tamil and Telugu are two of her future projects which are expected to release post lockdown.

Jasprit Bumrah Denied To Reveal His Thoughts !! These Reactions Are Beyond The Limit !!

Jasprit Bumrah, one of the leading pace bowler for Indian team, rested for the upcoming tour of India to West Indies. He did exceptionally...