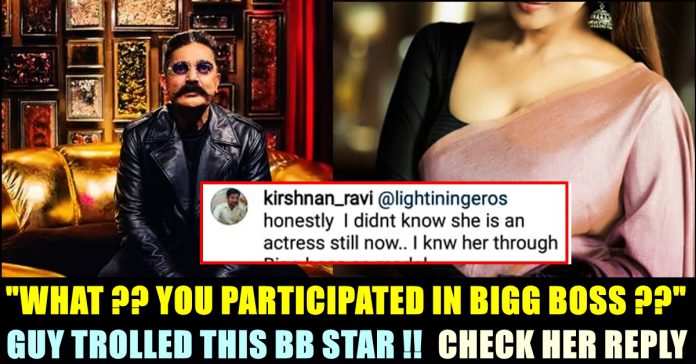 Sakshi Agarwal who became a familiar face among Tamil audience after appearing in Bigg Boss season 3, is currently busy uploading photos in her official Instagram account through which she enjoys 10 lakh plus followers as of now. Apart from her Bigg Boss stint, Sakshi acted in films such as Kaala, Viswasam in minor roles. Now, in a way of cherishing the moments she worked with the names like Rajinikanth and Ranjith, Sakshi shared the pictures of the deleted scenes in her Instagram account.

Adding the post, Sakshi wrote “Though the scenes could be deleted from the movie , but the awesome memories of #Kaala days will remain in my heart forever❤️ Some of the best times ever with the one and only #Superstar”

Though the scenes could be deleted from the movie , but the awesome memories of #Kaala days will remain in my heart forever❤️ . Some of the best times ever with the one and only #Superstar . #kaala #superstar #rajinikanth #ranjith #memories #happy #samuthrakani #kollywood #eswarirao #nanapatekar @rajinikanth @ranjithpa @thondankani

This post garnered huge reception from the followers of the Bigg Boss star. An Instagram user named as “Lightingeros” said that he never knew about the actress’s stint in “Kaala” movie and grabbed the attention of his fellow Instagram users.

Replying to him, Sakshi, in a humble way said that she didn’t blame him for not knowing about her “Kaala” stint. “its ok i dont blame you🙌” her reply said.

On seeing their conversation, another said that he know her only through Bigg Boss show. To the comment, Lightingeros asked “What was she in bigg boss too😱i didnt know that tooo”

Sakshi who got offended by this comment of Lightingeros, replied writing “then u really have some serious issues.. but happy that u follow despite not having seen me in bb☺️”

Sakshi Agarwal’s first ever cinema appearance was in Atlee’s Raja Rani. In the film she played a minor role of a girl in mall. In the Kaala film, Sakshi acted as the Hindi speaking daughter-in-law of Super star Rajinikanth. As far as the Bigg Boss show is concerned, Sakshi got evicted on the 49th day due to receiving least number of votes.

Cinderella, Aayiram Jenmangal, Teddy, Aranmanai 3 are some of her upcoming films, according to sources. Comment your views on the way Sakshi replied to the troller !!

A video that shows students being hit and forced to dance by their seniors came under the radar of the education department after it...