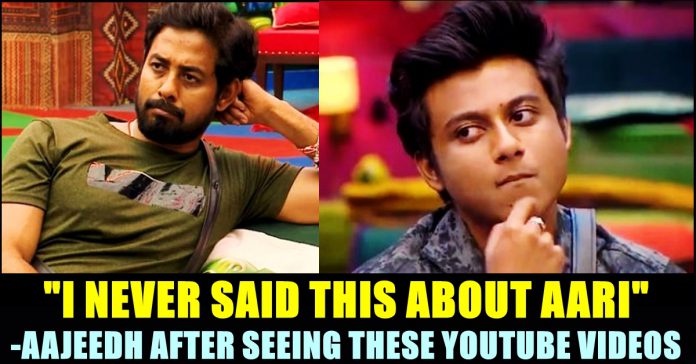 After getting evicted from Bigg Boss house, Aajeedh is pretty much active in social media platforms. The singer and aspiring actor is currently enjoying 1.9 lakh followers in Instagram ans is busy sharing the posts from his fan pages. He got eliminated after spending 90 plus days inside the Bigg Boss house which is being hosted by Ulaganayagan Kamal Haasan. Now, on seeing a number youtube channels uploading his videos with inappropriate titles, Aajeedh came up with a clarification through a couple of Instagram stories.

Aajeedh, a singer by profession entered the house as one of the contestants and did his part whenever he got opportunities. However, housemates nominated him saying that he is being less competitive comparing to others. Considered as a close companion of Balaji Murugadoss, Aajeedh maintained a good bonding with almost all the contestants.

Lately, he conducted a live session with his Bigg Boss housemate Samyuktha in his official Instagram account. The duo discussed about many things regarding the 100 days reality game show and also about their co-contestants in the live session. Many of their followers asked them to predict the winner of the show. Both of them stated their respective opinons.

However, a number of private youtube channels uploaded the video of their live session. “Aari will win the title”- a youtube channel made a title based on the video of Aajeedh. On seeing the misleading title, Ajeedh came up with a clarification in his official Instagram account. “Misleading thumbnail. I said “with the talks outside the house, aari could be the winner” never said he will be the winner. Took content out of context and made a deceiving video. I don’t encourage this behindwoods” he said his story.

“You guys have made me stay inside the house for 90 plus days by voting for me. That’s a huge thing for me. Definitely, it’s not a joke. Thanks for the love and support.” Ajeedh said in the first video after coming out of house and added that he got overwhelmed on seeing the video edits of him in some of the Instagram pages.

“I will keep entertaining you all with my music. I haven’t planned much yet. Will plan. I saw some positive comments and some negative comments. As I said inside the house, I always been myself. I never faked anything. I am taking all the positive and ignoring the negatives. I am also ready to accept constructive criticisms. Thanks for your love and hate” he said in that video.

This Is Why Sivakarthikeyan Donates His Salary As Lyricist To Na.Muthukumar’s Family ??

For past one week, a report on multifaceted Kollywood star Sivakarthikeyan donating the remuneration that he earns from writing lyrics to the family of...