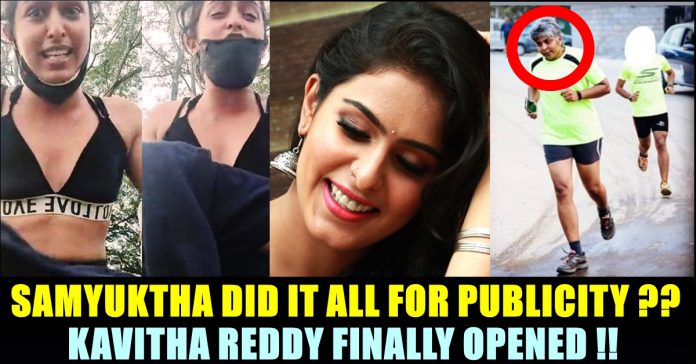 After several Female cinema celebrities including Ritika Singh, Shraddha Srinath, Chinmayi condemned Kavitha Reddy for allegedly attacking Samyuktha Hegde and her friends for the clothes they were wearing in a public park, the elderly woman has came up with a long story narrating her side of the story. Surprisingly, Kavitha Reddy, Indian National Congress’s spokesperson, has said that she never made a single comment on the attire of Samyuktha and her friends. She accused Samyuktha and her friends of dancing for music in a public park in a way of creating nuisance to the public.

According to Kavitha, Samyuktha started screaming and recorded video. Kavitha says that she called the police and took picture and recorded a small video clip. She further says that one of Samyuktha’s friend called her as “Bloody Bitch” which made her upset to an extend she tried to slap her.

Kavitha says that she didn’t make a statement on the actress’s attire even when the Police came. “She herself took of her top and started a live video. “Unlike Samyuktha I did not do any recording or o live as my objective was not to gain instant publicity at her cost or anyone’s cost, even though I knew she will play it all up in social media to her advantage and Truth will be overshadowed”. her statement read.

The Congress spokesperson completely denied the accusation against her which said that she did “Moral Policing”. “I also go for a run wearing shorts and many who come to Agara Lake wear what they want without any dress code or restrictions” her statement read.

“Even If I am asked 100 times this is the sequence of the incident and at no point I commented on her attire” Kavitha said. She further stated that Congress party has nothing to do with this. “I take full responsibility of the incident, that should not have happened at all to begin with” she said. “I regret and apologize if I have hurt anyone in the process” her pres not said.

Here’s the press not she released :

My Version of the Events….SM Smear Campaign cannot subvert the TRUTH!

Celebrity can use SM to make his/her narrative Trend… unfortunately Guards who did their job and Odinary people are real victims of Smear Campaign! pic.twitter.com/ddbS2cFaZc

Watch the videos posted by Samyuktha Hegde below :

However, the press note of Kavitha Reddy didn’t go well with majority number of Internet users who says that they saw different story in the videos that got released. Check out some of their comments below :

Ma'am but you literally said:

"If anyone comes dressed like you doing nanga naach in public, they should be beaten".

I hope you have time to reflect on this and understand that this is wrong.

Not convinced by your statement mam. In live session we saw all opposite .

"Nanga nach".. "girls like you" so many other derogatory remarks where made by you. You're so shameless aunty. Take this incident as a life lesson and mind your own business whenever you're in public henceforth. Cheap woman

Comment your views on this statement of Kavitha Reddy !!