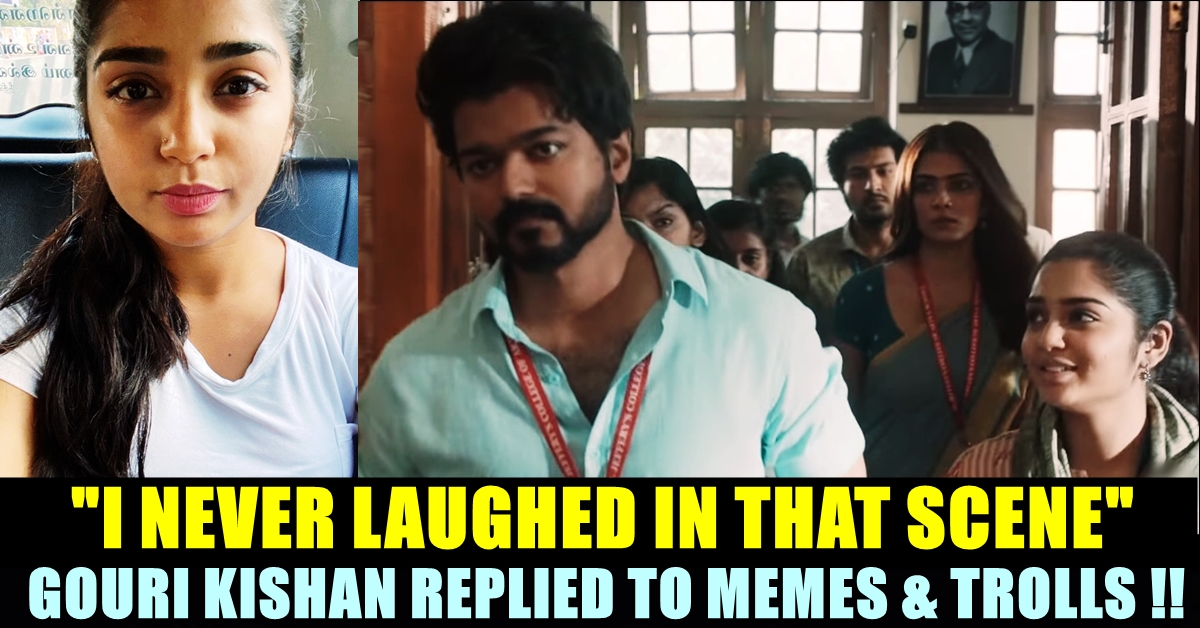 After seeing the so many memes and trolls that surfaced against Gouri Kishan after the release of “Master” deleted scene, the actress came up with a clarification to the fans and media publications. The 21 year old actress who debuted through “96”, had said that she never laughed during the making of the scene and confirmed that she is not the reason behind the deletion of it from the Vijay-Vijay Sethupathi starrer.

“Initially I too laughed at the memes and trolls regarding it and sent them to my friends. But recently, a talk is doing rounds saying that the scene got deleted from the film because of me. It is not true” said Gouri in a phone call interaction with Galatta youtube channel.

“The way I took my hand might have made people think that I giggled. The way some people cry might look like laughing in certain angles. I want to clarify that I was not laughing or I was not smiling during the scene.” Gouri made sure and suggested fans or media to question about it to director Lokesh Kanagaraj to confirm the same.

Gouri also said that the makers wouldn’t have gone for dubbing in the first place if they found it odd. “It wasn’t taken away because of me or anything. If they (makers) made the decision initially, they wouldn’t have gone for dubbing. We had already dubbed and we are ready to go.” said Gouri and she wanted media portals to confirm such cases with the associates of the film before jumping into conclusion.

Hear the audio of the “Master” actress below :

Deleted scene from the Vijay-Vijay Sethupathi starrer got released in the official youtube channel of Amazon Prime on Saturday evening. In no time, the four minutes forty nine seconds video garnered 6 million plus views with 4 and half lakh likes. The scene shows JD seeking justice for Savitha (played by Gouri) who got harassed by two of her male college mates on her birthday. As soon as the video surfaced in the internet, many fans got disappointed on the fact that they couldn’t witness such a good scene in theatres.

In the scene, JD was taking class on “Decision Making” to his students. A girl who interrupts the class, says that Parents of Savitha and the accused are getting compromised in the principal room. JD who accompanies Savitha to the principal room, beats the students who physically harassed her and makes them confess their crime.

Many fans felt that the scene looks so relevant to the current situation of our country and wondered why the makers have deleted it. It was also believed that one of the most probable reasons for the decision made by the makers could be the acting performance of actress Gouri throughout the scene. Now, the actress had confirmed that she never went out of the character “Savitha” during the making of the scene. Comment your views on the same !!

“Master” Deleted Scene Got Inspired From This 1994 Film ??
Ravindra Jadeja Announced Retirement ?? Fans Had “Mini Heart Attack” On Seeing This Tweet Of Him