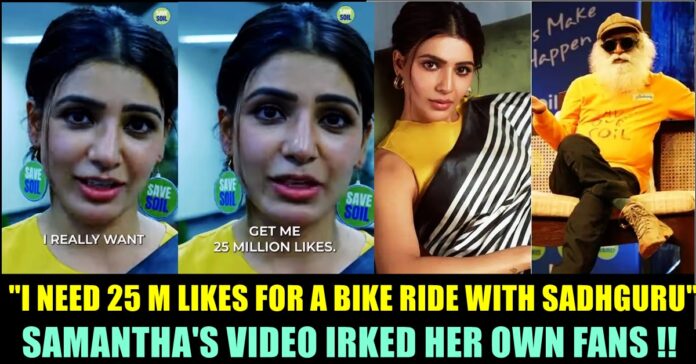 A video of actress Samantha asking Instaram users to provide her 25 million likes in order to go on for a bike ride with Sadhguru is trending in online platforms with many fans trolling the actress for involving herself in such irrelevant programs. A twitter user compared the video of “Kaathuvaakula Rendu Kaadhal” actress with Sai Pallavi who recently made a statement comparing “Kashmiri Files” with “Lynching of a cow smuggler” and stood by her stand by releasing a clarification video. 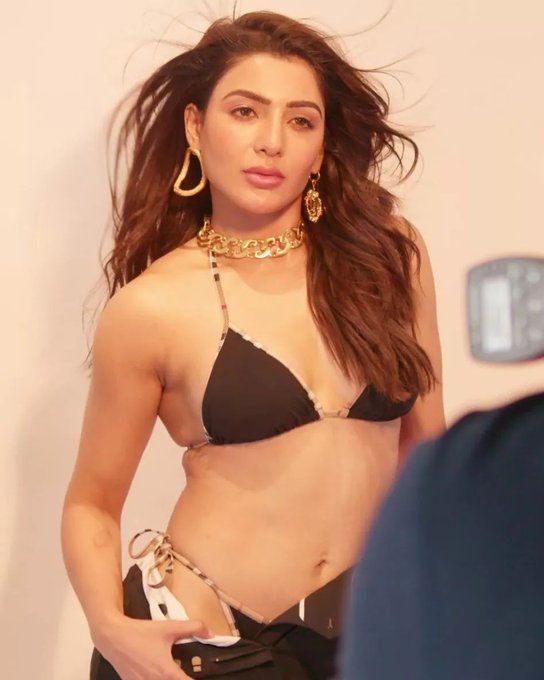 Samantha recently met Sadhguru at an event to mark his 100-day journey for the Save Soil movement in Hyderabad and discussed about several issues. The actress who is known as an ardent follower of the self styled Godman, danced with him to promote the save soil movement. In a video, the actress was also seen asking the users of Instagram to give 25 million likes to a post in order to make her go for a bike ride with Sadhguru who is originally known as Jaggi Vasudev. 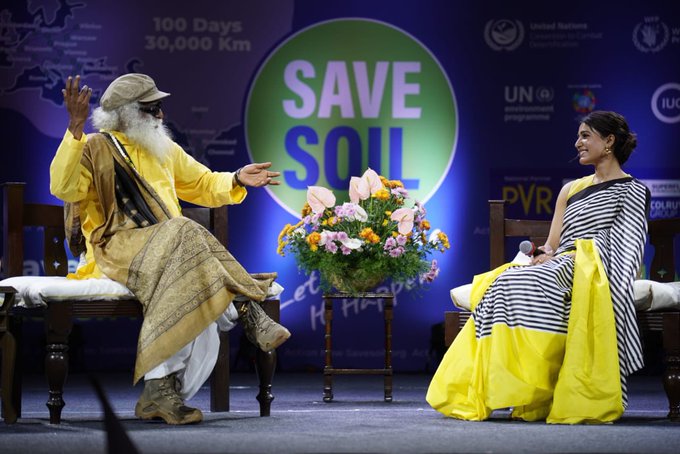 In the video which was uploaded in the Instagram handle of “Conscious Planet”, Samantha was seen saying “I was nervous, very nervous. Sadhguru is such an important part of my life. It was very special to be interviewing him today and I loved the interaction. two and half hours felt like and half an hour”

A pleasure to be with all of you in Hyderabad. If something is significant to us, we must do everything it takes to make it happen. Nothing is more integral to human Life than healthy Soil. #SaveSoil. -Sg #SaveSoilTelangana @Samanthaprabhu2 @AnchorSuma @Ram_Miriyala @iamMangli pic.twitter.com/3RHtvMmERK

The post didn’t go well with many of the actress’s followers which is evident through the posts that surfaced in the social media platforms. “Who all took part of #SaveSamantha campaign by not liking that Samantha reel where she asks for 25m likes for a bike ride with Sadhguru” a user of Twitter said whereas another one wrote “Sai pallavi is out there addressing a controversy and instead of taking her statement back, she’s advocating humanity more than any religion while someone’s out there saving soil for 25 MILLION LIKES 🤡🤡🤡🤡”

Sai pallavi is out there addressing a controversy and instead of taking her statement back, she’s advocating humanity more than any religion while someone’s out there saving soil for 25 MILLION LIKES 🤡🤡🤡🤡

Who all took part of #SaveSamantha campaign by not liking that Samantha reel where she asks for 25m likes for a bike ride with Sadhguru.

These actresses are stupid vulnerable and lonely af that they think they are in pursuit of some spiritual Mumbo jumbo or isssalll just business.

To keep a check on your relevancy ? https://t.co/3dYkWQRPO0

Are we all gonna ignore Samantha’s Sadhguru fanatic behaviour?
The guy is a crook..

Previous article“Pls Don’t Underestimate” – Tamil Actress After Getting Infected To COVID 19 Virus !!
Next articleSamantha Reacted To The Affair Rumours Of Naga Chaithanya & Deleted Her Tweet !!

Dalip Singh Rana who is popularly known as "The Great Khali" among the fans of World Wrestling Entertainment joined the BJP party on Thursday....