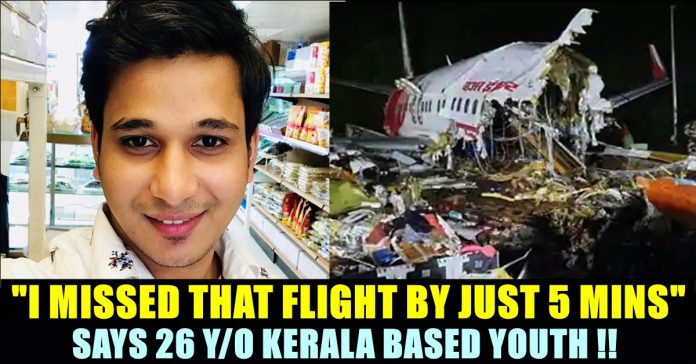 At least 18 people including 2 pilots died in Kozhikode after the Air India express flight skidded off the runway and fell into a 35-feet valley before splitting. Captain Deepak Sathe and his co-pilot Akhilesh Kumar were among those killed onboard the Dubai-Calicut Air India express aircraft carrying 190 passengers as part of the Vande Bharat Mission.

As the entire country is mourning due to the ill-fated incident, a 26 year old youth who was supposed to travel in the flight, expressed his emotions to media. A 5 minute delay caused by the airport officials saved the Kerala based Abu dabi resident. The youth missed the flight after officials demanded him to pay the fine amount for overstay.

The youth was supposed to leave UAE by July 10, after his work visa with Royal dates expired in June. He who couldn’t travel back to his hometown Kerala due to the COVID 19 pandemic, initially thought of extending his visa till December to stay in UAE. After seeing flights getting opened for repatriation, he decided to apply to return on a Vande Bharat Mission. After trying hard, he managed to get a ticket for 7th of August.

“I was happy thinking I was going to return to Mattannur in Kannur, my home town, after more than a year as I would get to see my mother.” said Afzal to Gulf News who added that he got engaged with a girl and was planning to marry her after completing his quarantine period in his hometown after reaching. The youth was informed that he has no pendings penalties or fines when he went to Tasheel to check. He was told that everything was clear.

On 6th of August, Afzal gave his blood test to the airport counter and got excited to receive his boarding pass which showed his seat number as 18C. “The flight was scheduled for 1 : 30 PM, as we waited at the airport, I got acquainted with a co-passenger named Ayesha and helped her with her luggage once we started queuing up. However, at the immigration counter, she got her eye-test and boarded. But I was stopped, and the officials told me I had a pending fine of around Dh1000 for overstay, which needed to be cleared before I could board” said Afzal to the media which sharing about his experience.

Afzal who was short by nearly Dh 500 to clear the penalty, stood at passport control for nearly 2 hours trying to convince the officials to let him board. Finally, the officials gave him an option to leave without paying with a warning that he will have to face problems in future if he is willing to return to UAE.

“That was not OK for me as I had found another job, and would need to return after two months.” said Afzal. When the staff members suggested him to arrange the money before the flight takes off, Afzal called his colleague Ibrahim Adkar around 1 : 15 PM seeking money. Ibrahim who was working as PRO in his previous company, assured Afzal that he will send someone soon with the money.

Ibrahim while recollecting the phone call of Afzal said “He sounded so tense when he called me. I immediately sent a friend with money but by the time he reached the Airport, the flight took off” said Ibrahim to the media.

Afzal managed to make the payment only at 1 : 35 PM which was already 5 minutes late. He said that he felt bad for missing the flight and sat there for few minutes. He called another colleague to pick him up as he had no money left. While sleeping at his sister’s home in Deira, he got phone calls from his friend Ibrahim and others informing him about the Kozhikode crash. “I couldn’t believe it” Afzal said.

Afzal said that he trying to contact the family members of Ayesha whom he helped with her luggages in the queue at airport.

Previous articleHere’s What Vijay Said When He Was Asked To Act As “Villain” In A Mahesh Babu Film !!
Next articleLegendary Director Of Rajinikanth & Kamal Haasan Reacted To Meera Mitun Issue !!

Former Pakistani star batsman Mohammad Hafeez came up with a tweet extending his support to Indian youngster Arshdeep Singh who dropped a catch at...

The shooting of Nerkonda Paarvai has been wrapped up ahead of its schedule, which has made both producer Boney Kapoor and actor Ajith immensely...