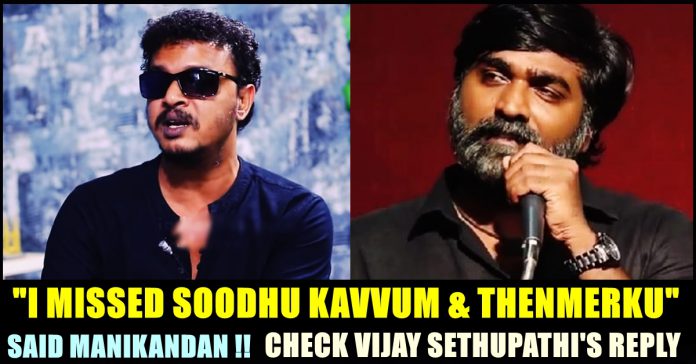 In a recent interaction with a youtube channel, Vijay Sethupathi expressed his admiration over actor Manikandan who said he couldn’t achieve his dreams in film industry through an interview. Mani kandan is known for acting in Shankar’s multi starrer “Boys” and he acted as one of the five friends in the 2003 film. Vijay said that he loved the way how he explained his current situation by wearing a cooler. Video of Mani kandan’s interview went viral across the social media platforms weeks ago.

Vijay revealed that he also applied to act in “Boys” while living in Dubai. While talking about the films he missed, Manikandan said that he missed “Kaadhal”, “Soodhu Kavvum”, “Thenmerku Paruvakaatru” etc. “I feel happy for missing “Thenmerku Paruvakaatru”. We got an actor like Vijay Sethupathi who have done impressive films. I also watch his interviews. He is a good human being and I love him” said Manikandan in the interview.

Reacting to this interview, Vijay said “His whole interview was so cool. Looking at the snippet, I thought he was struggling in his life. While watching the interview, I realized he looks so sweet and cool. I initially felt bad, thinking he was financially struggling but it looked so cool” said Sethupathi and went to imitate him a bit.

“It looked so good and positive. The way he said that don’t even have Rs. 100 and about meeting ends with the monthly rent of his houses, everything looked cool. His body language itself looked attractive and it was nice. I strongly believe that Mani kandan will get busy soon. He looks so attractive now.” Vijay said and revealed that he sent his photo to act in “Boys” film.

“At that time, I was 21 years old. I sent my picture to act either in Boys or Five Star” the Pizza actor said. Watch the video below :

On the work front, Vijay Sethupathi is going to see four of his films getting released in September month which includes “Anabelle Sethupathi”, “Laabam”, “Tuklag Darbar”. Many other projects of the actor such as “Kaathu Vaakula rendu Kaadhal”, “Maamanithan”, “Vikram” are in various stages of production. Comment your views on this interview of Mani kandan and Vijay’s reaction to it !!

Previous articleJUST IN: Ranjith Opened For The First Time About His Film With Vijay!!
Next articleBharathi Kannamma Fame Venba Lashes Out At The Comments Made On Her!!