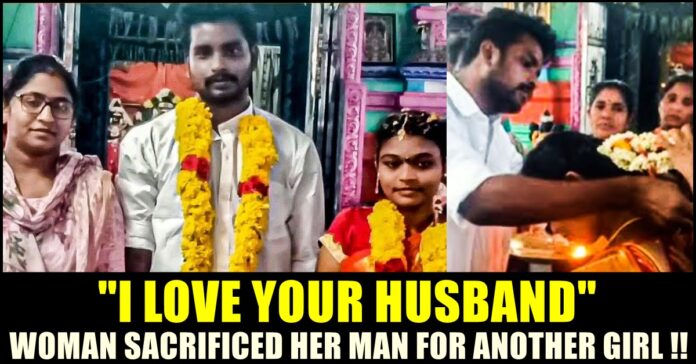 “I Love Your Husband”- Woman Sacrificed Her Husband For A Young Girl !! WATCH

Even in the triangular love movies that were released 40 years ago, we wouldn’t have seen stories such as a woman sacrificing her husband to another girl just because she shed tears and such incident took place now in 2022. The incident took place in Thiruppathi district and the senior wife decided to stay with the newly wed couple under the same roof. 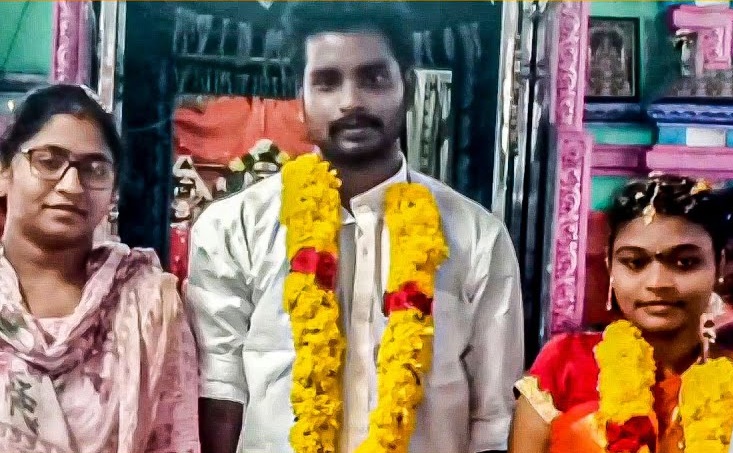 The strange marriage event that reported from Ambedkar Nagar in Dakkili of erstwhile Nellore district has became talk of the town with the video of the incident going viral among the online users.

According to reports, an individual named Kalyan who is a Tik Tok influencer from Ambedkar Nagar, married a woman named Vimala from Kadappa district, whom he met on social media two years ago. Prior marriage, Kalyan said to have a long distance relationship with a girl named Nithyasri, who is also a famous Tiktok user from Visakhapatnam. He got separated from her due to some issues.

After marriage Kalyan and Vimala were leading a happy life together in Ambedkar Nagar. In the meantime, Nithyasri came to visit her ex-lover a few days ago. Even after knowing that Kalyan got married, Nithyasri pleaded him to marry her. She even stayed in the village in an attempt to make Vimala accept for their marriage. 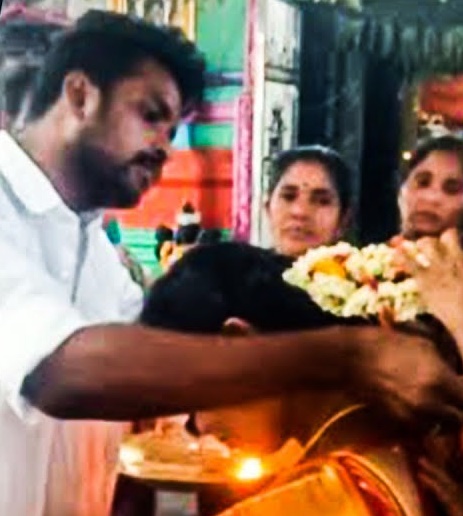 To everyone’s shock, Vimala, knowing about the broken relationship between her husband and Nithyasri, decided to unite them. She agreed to get them married  and stay together, despite having no legal sanction for their marriage. On Wednesday, Kalyan tied knot to Nithyasri in a temple in the village with the presence of his first wife.

Days ago, In a first of its kind incident that took place in Odisha, a man married a transwoman with the consent of his wife with whom he has a 5 years of marriage life. The news world got shocked knowing about the incident as the law of our country doesn’t allow second marriage till the legal divorce of first marriage. On top of all, the wife who gave permission decided to stay with her husband even after his marriage with the transwoman and the series events caused various kind of reactions in social media platforms.

The 32 year old man, identified as Fakir married the transwoman named Sangeetha at a temple in Narla located in Odisha’s Kalahandi district with the prior approval of his wife. The man has a two year old son with his wife and fell in love with the transwoman last year after seeing her in the streets of Ambadola in Rayagada district. According to reports, it was the man’s love at first sight. He witnessed the transwoman for the first time while she was begging at the streets and they exchanged their mobile numbers to keep in touch. Read Fully : BIZARRE : Man Married Transwoman With His Wife’s Consent !!

VJ Parvathy Replied To A Guy Who Demanded Her Arrest !!

Several trolls, memes, harsh criticisms are surfacing in social media platforms against video jockey Parvathy ever since the arrest of the makers of "Chennia...

Actor Ajith and Vijay grabbed headlines after reaching their respective voting polls to cast their votes on the biggest day of Tamil nadu politics....