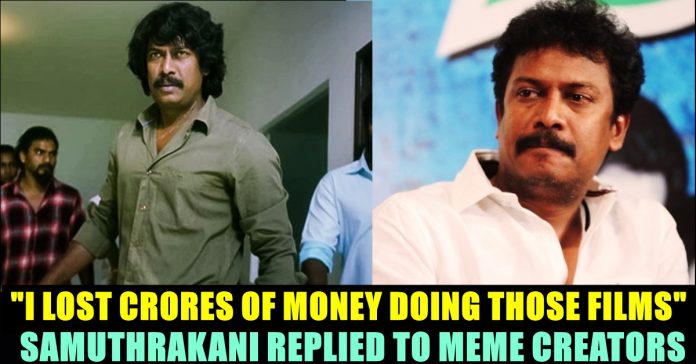 Samuthrakani appeared in an interaction with a youtube channel after a long time ahead of the release of his “Aeley” directed by Halitha Shameem and answered to many of the questions asked by the interviewer. While talking about many of his films being preachy, the versatile actor said that he is doing those films only for those who love him and not for the meme creators. He who asked the meme creators to avoid watching his films, revealed that he lost crores of money doing films such as “Appa”, “Adutha Sattai” etc.

Samuthrakani, is one of the busiest craftsmen in Tamil film industry right now. He who acts in variety of roles such as Father, brother, friend and villain is also acting as protagonist in socially responsible films. He also involves himself in directing movies and made a sequel to his highly successful film Naadodigal recently.

Ahead of his “Aeley” release, the actor who played the role of a ice vendor based on a rural part of Tamil nadu, opened about many of his experience throughout his career. The film got directly premiered on Vijay Television and is also available on Disney plus Hotstar.

In the recent interaction, when the host said that people are criticizing him of being so much “preachy” in many of his films, the actor replied saying that what he is doing through his films is not advice but “care”. “It is my care towards people. I see everyone as my blood relation. Only because of my love, I am telling messages through my films” Samuthrakani said in the interaction.

“If you don’t want to listen, leave it alone. There is no loss for me. My message is for those who are interested in listening to them. I am not conveying such messages to the meme creators. I don’t want them to see my movies. If you don’t like, then avoid it. I am doing it only for the people who love me and I will continue doing it.” the actor said.

Samuthrakani further revealed that he lost crores of money doing films such as “Appa”, “Adutha Saatai” etc. “I am not earning several crores by doing films that conveys social messages. Instead I am losing my money. Do I earner crores and crores by doing “Appa” or “Adutha Saatai”??. No, I only lost crores. My intention is to give something back to the society which gave me everything.” Samuthrakani said in the interaction.

Despite of the complaints and accusations that were emerged against Madan aka "Toxic" Madan, his supporters defended him saying that he has a heart...