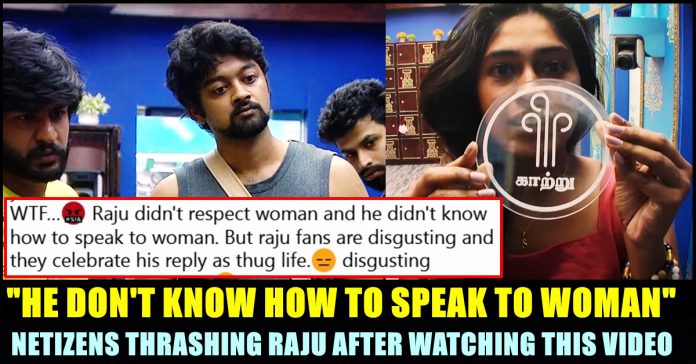 “I Lost All Respect For Raju” – Netizens After Watching Recent Episode

Bigg Boss season 5 successfully entered its fourth week after seeing two important evictions and a walk out. Contestants who took part in the show, has already started involving in verbal spats over various issues. Last week, as expected, Priyanka was warned for communicating with each other iin a secret way. Kamal Haasan condemned Abishek for the way he played the “coin” task. Now, as the fourth week got progressed, the “coin” task continued and a problem exploded after Suruthi decided to steal Thamarai’s coin.

While Thamarai Selvi went to change clothes in the dressing room, Suruthi went inside and took her coin with the presence of Pavni. Finding that her coin got missed, Thamarai Selvi confronted Suruthi and said that what Suruthi did was immoral. Contestants such as Raju, Annachi, Ciby, Varun came in raising voice for Thamarai Selvi. During the argument, Raju asked Pavni who was defending Suruthi whether she would keep mum if he steals her coin while she was changing clothes.

The words Raju used while making his point to Pavni made a number of viewers feel that he crossed his boundary a bit. A social media user said “No men will ask a women, appo nee dress mathum bodhu naan varalama for the sake of argument too. But some men can openly ask, today known that” in his tweet with a many others posting similar tweets.

Few even expressed their opinion against Raju for the way he asked the coin back from Sururthi. Check out some of such tweets below :

No men will ask a women, appo nee dress mathum bodhu naan varalama for the sake of argument too

But some men can openly ask, today known that

It’s really creepy . How can someone pass such a comment and feel nothing about it ?

Girls will scare for the remaining time they need to spend inside house and be cautious always . Never make a girl uncomfortable just to shut them off the competition ..!! 🤦🏻 https://t.co/zlJMgbIfBI

I am really wondering his audience blindly supporting him. And how can #Raju say i gave that coin to her so give it back. Who is he to say that, now reason is clear why #Akshara is behind him so tht he ll protect her. #BiggBoss5Tamil #BiggBoss #biggboss5 #biggbosstamil5

The comparison he made itself is cheap & unfair. Which is why #Pavni asked if she had done it to him (a man) & established it’s a different scenario.

A grown man should know why it’s different…#BiggBoss5Tamil #BiggBossTamil5

#Pavni & #Suruthi – I agree with majority you should not hv taken the coin when she is changing the dress.Way #Raju spoke was pure disgusting.
But many people including #Ciby , #Annache spoke in a sane sensible way. This is going to backfire big time on you both.#BiggBossTamil5

WTF…🤬@ikamalhaasan He has crossed his limits.
Highly condemnable.
How can he ask a woman like that?#BiggBossTamil5 #BiggBossTamil

“Shall I come and steal your coin while you are changing your dress”
WTF…🤬 Raju didn’t respect woman and he didn’t know how to speak to woman. But raju fans are disgusting and they celebrate his reply as thug life.😑 disgusting
Ithuvum raju tha sonna 😑

I lost all respect on Raju, how can he says what if I come and take your coin when your changing dress to Paavni. Such peverted mind easily letting his words out.
Asshole. #BiggBossTamil5

You have more trust & little to no fear with a woman whilst the example with a man is actually a scary thought, potential trigger, for many women hence why it was inappropriate.#BiggBoss5Tamil #BiggBossTamil5

You simply shouldn't challenge women about scenarios like this and place men for comparison, it's common sense why it was wrong of him to say that. Unsure what ppl are missing here…🙃#BiggBossTamil5 #BiggBoss5Tamil pic.twitter.com/jatcKXRAVp

Raju wants to take coin from Pavani while she’s changing dress… he says that’s not wrong.. ivanuku Elam fans.. Such a pervert.. #Biggbosstamil5

As far as today’s promo is concerned, Pavni and Suruthi are still discussing about what Raju said. Suruthi could be seen expressing her displeasure over Raju asking the coin back saying that he gave it to Thamarai.