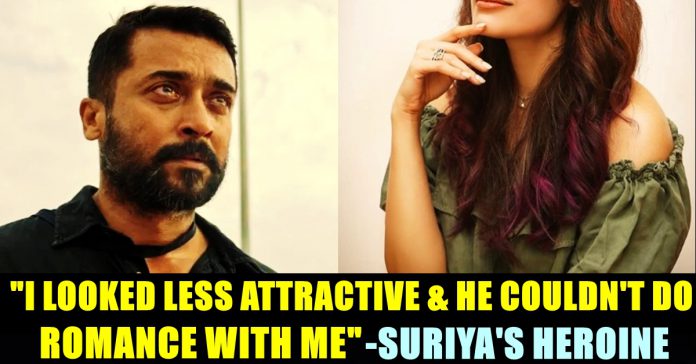 Actress Shruthika who is known for acting in films such as “Shree”, “Album”, recently appeared in an interaction with Behindwoods youtube channel and left the users of Internet in splits with her humor sense and witty answers. She said that Suriya couldn’t do romance with her as she is less attractive and also confessed that all the films she acted were flops.

Being a grand daughter of legendary actor Thengai Srinivasan, Shruthika acted in a number of films such as “Shree”, “Nala Dhamayanthi”, “Album” etc. However, due to the poor performances of the films in the box office, she stopped acting in films and through the recent interaction with the youtube channel, the actress had confessed that she finished the careers of many directors.

While talking about working with legendary filmmaker Vasantha balan who is known for making quality films such as “Veyil”, “Angaadi Theru”, Shruthika said that she feels pity of him. “I have finished the careers of several directors” the actress said to Agni, the host.

The actress who says that she is an university rank holder during her academic period, says that she is also have administrative skills but not acting abilities. She who is now a mother of an eight year old boy, recalled her experience in Tamil film industry in a humorous way.

When Agni mentioned her films Shree, Nala Dhamayanthi as widely reached films, Shruthika interrupts him and says that those films are flops. “They are box office flops, how could those films get reach ?” she trolled Agni. “At times, I couldn’t act in romantic scenes. Though Hero tries a lot, he couldn’t do romance with me as I would look less attractive at that time. I would also start laughing while doing romantic songs” Shruthika says.

While talking about one of her hit songs, Shruthika says that music director wasted his skills by composing good songs for her film. She also felt that he could have composed the song for some other heroine. The actress’s interview goes viral across the Tamil internet for the humorous nature of Shruthika. Netizens are lauding her by terming her as real life “Santhosh Subramaniyam Haasini”.

She killed the show 😂😂😍😍😍 pic.twitter.com/rphb5qN4rm

Previous articleNegative Tag Against Actor Ajith Irked Internet Users !!
Next article“Those Who Are Trusting Him Would Be Abandoned Midway” – CM Edappadi K Pazhaniswamy About TTV Dhinakaran

While team India is having a hard time out there in the field, the ever-cheeky Rishab Pant's cute poem about "Washingtom Sundar" wins Internet....

Actress Samantha Ruth Prabhu who is pretty much busy signing films in various languages, has been leaving her fans and co-stars stunned through the...