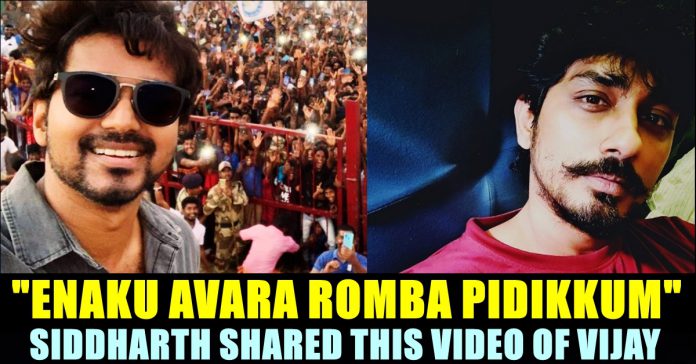 While telling people how important it is to get vaccinated to prevent getting infected from the COVID 19 virus, Siddharth shared a video of actor Vijay in his official Instagram account. In the video which was shot nearly 10 years ago, Vijay could be seen saying how much he likes Siddharth as an actor and performer. Now, when a fan page in Instagram named “Tamil nadu Vijay Fans Karur” uploaded the video, Siddharth shared it in his story and cherished it.

Actor Siddharth has been making headlines for past couple of days due to his political opinions. He has been constantly criticizing the ruling government for the immense hike in the increase of COVID 19 positive cases through his tweets. As a result of it, he came a victim of digital harassment and the supporters of BJP party started making threats to him.

After exposing the BJP members who caused threat to him by making continuous phone calls, actor Siddharth refused Police protection and said that the time of the police officers could be used for something else during this pandemic situation. In his another tweet, Siddharth also said that his mother feels afraid and explained how he gave her the courage by reading out the tweets of public. It is notable that a hashtag saying “I Stand With Siddharth” trended nationwide during the evening of Thursday.

Now, the actor has shared a video of actor Vijay in his official Instagram account in which we could see Vijay lauding Siddharth as a performer. The video was short during 2010 as a part of the promotion of Siddharth’s “180” movie.

“I Generally like Siddharth a lot. I have seen all of his films. I have even watched the films he acted in Telugu, Hindi including his “Rang De Basanti”. He is a cuter person and cutest as a performer. As I like him generally, I liked him a lot in this film” said Vijay after watching his “180” film.

Siddharth who is enjoying 4 lakh plus followers in Instagram, shared the video as his story. Here’s the screen shot of his story :

On the work front Siddharth is expected to be seen in “Takkar”, “Saithan Ka Bachcha”, “Indian 2”, “Navarasa” and “Maha samudram” whereas Vijay is busy participating in the shoot of his upcoming film which is tentatively titled as “Thalapathy 65”.

The instant communication medium whatsApp is down across the world as a result of which Meta came up with a clarification saying that it...