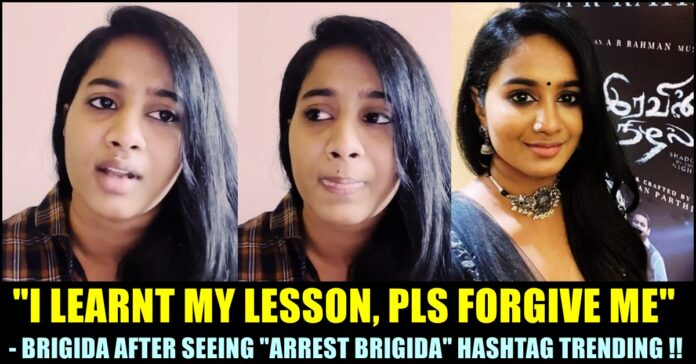 Brigida who made her debut through “Iravin Nizhal”, released an emotional video through her official twitter handle, asking apology to the public who got hurt. The emerging actress said that she learnt her lesson and wanted people to forgive her for the statement she made about slum people.

“The statement I made was wrong, I feel extremely sad for making such statement. My heartfelt apology to the people who are watching this video. I made such statement by considering the film but I realized that no explanation will be enough. I didn’t expect that this will be my first video after acting in the film” Brigida said.

“The very second I saw the hashtag “Arrest Brigida”, I got affected immensely. I can’t believe that I conveyed such flawed statement. I saw the abusive comments and learnt my lesson now. I understood that I hurt you people. I also understood how you people are valuing me” she further said.

“I myself have friends from slum area and my heartfelt sorry to you all for hurting your sentiments. A friend said that he is going to file a case against me and added that I must face it. He wanted me to ask my apologize through social media and I did it yesterday itself. I didn’t do it because he asked for it but that statement of mine affected me a lot. After I made my apology, he decided not to file a case and it made me feel extremely happy” Brigida said and wanted everyone who got hurt to forgive her. “I will be cautious and be responsible during my public speeches” she added.

Brigida received flak from the users of the micro blogging social media site as she said that people from slum area are known for using abusive language and they registered only fact in the film.

Followed by her apology, Director of “Iravin Nizhal”, Parthiban also issued a clarification and said that he always intended to made people from he slum to become a hero through his films. Director Parthiban, “Iravin Nizhal” of whom got released recently, is currently busy promoting the film by visiting theatres and being active in social media platforms. “Iravin Nizhal” was released on 15th of July and the makers promoted the film saying that it’s World’s First Non-Linear film that was shot on single shot.

Music composed by academy award winner A.R Rahman, the film’s ensemble caste includes, Brigida, Robo Shankar, Varalakshmi Sarathkumar and others. The film was certified as an adults only due to the abusive language used in the film and due to some of the visuals that included nudity and violence. While interacting with media after watching the film, Brigida answered to a question on the abusive language used in the film.

“Using so much of bad words is ethically wrong but the entire story revolves around a single man who faced only bad things in his life. So, it could be told only in that way. If we are visiting a slum, we could hear only the bad words. We couldn’t cheat just because we are making a cinema. People know how they would talk in that area” Brigida said to the press.

“Bad words couldn’t be avoided in the film as the maker thought of showing it as raw as possible” she added. Statement from the young actress didn’t go well with a number of online users who thought that the people from slum area are being demeaned and generalized.

Here’s the video of her speech :

Previous articleNetflix Cancelled Vignesh Shivan-Nayanthara Marriage Project Due To This Reason ??
Next article“Draupathy Is A Bad Dream In My Career” – Actress Sheela !! WATCH

In a shocking turn of events, a female professor was forced to quit for uploading a bikini picture of herself in her Instagram handle....