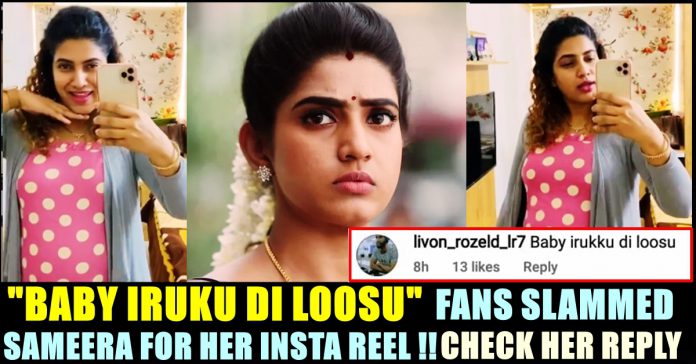 Television actress Sameera Sherif recently announced through her social media accounts about her pregnancy. She who got married to her “Pagal Nilavu” co-star Syed Anwar in the year 2019, announced that they are expecting a baby on 11th of April this year. Recently, Sameera, along with her entire family, got vaccinated and made a vlog out of it to upload it in the youtube channel of Sameera. She who is pretty much active in social media platforms, also moved her legs for a song and uploaded an Instagram reel on Tuesday. On seeing her video, many people came up with comments criticizing her for dancing while being pregnant.

Sameera didn’t shy away from replying them as she captured the screen shot of the negative comments and posted them as her story to reply, not only to the people who commented but also to everyone who dropped comments in similar way.

Sameera Sheriff and Syed Anwar acted as a love couple in a serial of Vijay Television named “Pagal Nilavu”. They also took part in the reality game show named “Mr and Mrs Chinnathirai”. Sameera enjoys nearly 6 lakh followers for her Instagram account and nearly 3 lakh subscribers for her youtube channel. She who has been making vlogs based on her daily routines, recently made one regarding the vaccination of her family.

Post vaccination, Sameera came up with a reel video, performing dance for the song “Vaaya en Veera” from Kanchana by holding her phone by herself.

On seeing this video of her, many started criticizing her for shaking her body while being pregnant. “Pls check doctor about your I watch will that radiation is harmful or not” a follower commented and Sameera replied to her saying “no radiations! Not to worry 😊”

However, many other followers of her continued slamming her for the dance video. One of them went on to disrespect the actress by calling her as “Loosu”. Many even wanted her to stay home and rest as she got vaccinated recently. Check out some of such comments below :

Replying to these kind of comments, Sameera, through a series of stories, said that knows to take care of her child more than others. To the one who asked her to take rest as got vaccinated recently, Sameera replied saying “Just because I got vaccinated, it doesn’t mean I have to go and rest. Vaccine is to rescue yourself from disease. Grow up, Grow your standards, Grow you mentality and get vaccinated if you haven’t got vaccinated yet”

To the negative comments that got surfaced for her reel video, Sameera said “I know a baby is growing inside the baby and I am the mother of the baby. Anybody in the world cannot do justice to my baby as much as I do. I know what is best for my baby and I know how to take care of my baby.” and added that she will keep doing what she loves to do.

“You are nobody to tell me or remind me that I have a baby. better grow up.” Sameera sherif further said.

“Pagal Nilavu” actress Sameera Sheriff gives back to trolls . . “I am the mother of the baby, I know what is the best for the baby” she replies to those who criticized her for dancing while being pregnant . . #Sameera #VijayTelevision #pregnant #Instareels pic.twitter.com/N4BQkgdAJV

This Art Work Of A Fan Is So Good, Even Vijay Sethupathi Could Not Resist Responding Him !! Check Out !!

We have seen fans painting a picture of their favourite actor and posting it in twitter in order to get the attraction of the...