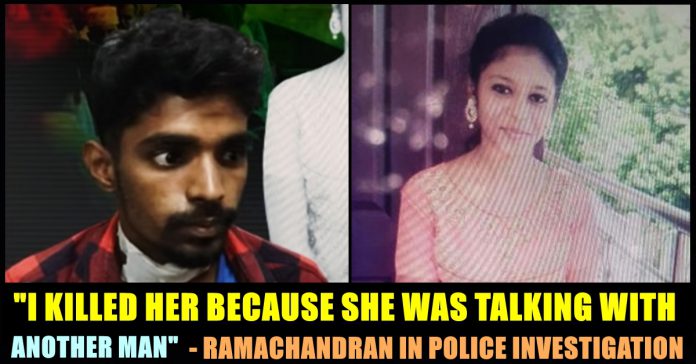 In the preliminary investigation, murder accused Ramachandran confessed killing Engineering student Swetha at Tambaran railway station and cited her relationship with another man as a reason for his inhumane act. He reportedly told Police that Shwetha saved the man’s number as “Dharani” in her cell phone and has been contacting him frequently. Ramachandran said that he decided to check her cell phone after she refused to continue the relationship with him.

On the afternoon of Thursday, an incident that took place at Tambram railway station shook the entire state of Tamil Nadu. Shwetha, a student from Chrompet was slain by a youth which led the Selaiyur Police Department to start investigation. Swetha M who was killed is a second-year student pursuing a Diploma in Medical Laboratory Technology at the Madras Christian College’s School of Continuing Education. Ramachandran, a native of Thirukkuvalai, Nagapattinam District who has been working at a private manufacturing unit in Chennai has committed the brutal deed.

According to the police, Swetha had been invited by Ramachandran to a spot after her classes They have met near the railway station and have walked to the railway quarters. Police have been informed by the eyewitnesses of the scene that Ramachandran was involved in a heated conversation with Swetha. Following this, Ramachandran took out the kitchen knife which he had kept hidden all the time and stabbed Swetha. He also attempted suicide at the same spot. However, the people who were nearby, nobbled him and informed the police.

In the investigation, Ramachandran confessed about the murder and cited the girl’s relationship with another man as the reason for his act. He said that killed Shwetha as she refused to continue her relationship with him and has been contacting a man frequently, name of whom was saved in her mobile with a female name. Ramachandran and Shwetha got introduced to each other during their train journey and shared their cell phone contact numbers with each other.

Both who were completed Engineering graduation, started involving in a love relationship. Ramachandran said that they were loving each other for past two years and visited some places together. He said Shweth started avoiding after joining research studies. While meeting her in person, Ramachandran said that he checked Shwetha’s cell phone and found Shwetha interacting with a contact named “Dharani” frequently.

Ramachandran, further said that he contacted the number and heard the voice of a youth. When he asked him whether he is loving Shwetha, the youth answered “No”, according to sources. Heated argument took place between the duo after Ramachandran questioned Shwetha about the youth. She wanted to give up the relationship with Ramachandran forever and the latter invited her to meet one last time before parting ways. At that meeting, he decided to kill her before killing himself. In the attempt, he killed Shwetha and failed to kill himself.