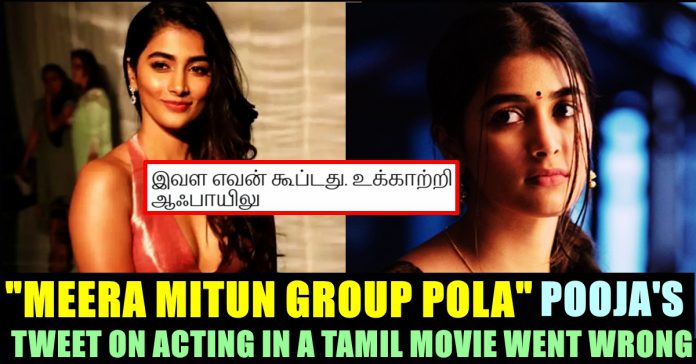 For saying that she waiting to get a good script from Tamil filmmakers to make a come back in Kollywood, actress Pooja Hegde got trolled by the fans of Tamil cinema. Now, the actress came up with another tweet asking people not to jump into conclusions, as soon as the rumours about her Kollywood come back surfaced. Many media portals reported that Pooja is going to act in Suriya-Hari’s upcoming film “Aruva”. For denying the rumour through of official twitter account, Pooja Hegde facing severe trolls and criticism from various kind of people. Few people even criticizing the actress for updating about her movie update during this pandemic situation.

Pooja Hegde debuted to Tamil film industry through Mysskin-Jeeva’s “Mugamoodi” which became a box office dud. However the song “Vaaya Moodi Summa Iru Da” from the movie registered her face among the fans of Kollywood. After that, Pooja went on to excel in Telugu film industry. Her recent sensational song “Butta Bomma” with Allu Arjun gained her fame across South India. Now, as the actress is eyeing for her comeback in the Tamil industry, fans of top actors are highly believing her to pair with their favourite stars. Earlier Vijay fans said that she is going to pair with him in the sequel of Thuppakki and currently Suriya wants her in “Aruva”.

Now, denying all the rumours regarding her Tamil comeback, Pooja wrote “Hello hello. Let’s not jump to conclusions of me doing Tamil films right now. As of now I haven’t signed anything and I have a couple of narrations lined up, but I am definitely looking forward to doing a Tamil film this year…if all goes well…fingers crossed Thank you ❤️” in her official twitter account.

Hello hello. Let’s not jump to conclusions of me doing Tamil films right now. As of now I haven’t signed anything and I have a couple of narrations lined up, but I am definitely looking forward to doing a Tamil film this year…if all goes well…fingers crossed 🤞🏼 Thank you ❤️

As said, this tweet angered a separate set of twitter users for its timing and for the way it was written. One of them even compared the actress with controversial personality Meera Mithun. Check out some of them below :

Comment your views on these reactions received by Pooja Hegde !!

Sarkar has suffered a serious setback, as the South Indian Film Writers’ Association (SIFW) has declared that the story of assistant director Varun’s Sengol...