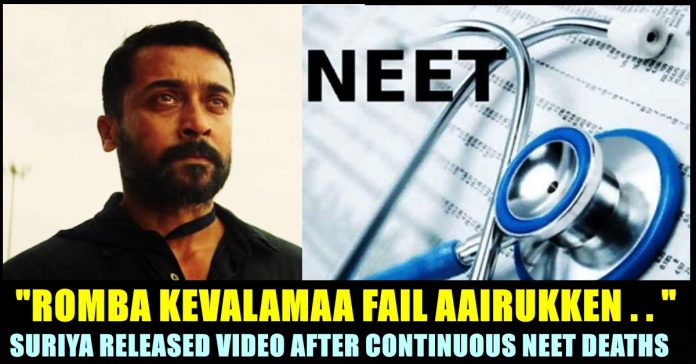 Tamil actor Suriya came up with a video to encourage students after a number of student decided to end their life due to the fear of facing NEET examination. The actor requested students to talk with their loves ones if they have any problem mentally and said that an exam is not bigger than their life. He also produced himself as an example to boost the confidence level of the students and made it clear that marks and exams doesn’t mean the entire life.

On September 12, Dhanush, son of a farmer, died by suicide, hours before facing the NEET examination. In a village near Jayankondan in Ariyalur district, a 17 year old student named Kanimozhi killed herself due to the NEET examination which is being conducted to provide medical seats for 12th students. Most recently, another 17 year old girl ended her life after writing the examination in her home near Katpadi, Vellore district. Named Soundarya, she reportedly told her dear ones that she didn’t do the exam well.

Reacting to the continuous deaths, Chief minister MK Stalin pointed to the passage of a bill in the assembly on 13th of September and said “Right from the beginning, we are opposing NEET which is shattering the dreams of Tamil nadu students to pursue medical education. We have started a legal struggle in full swing with the passing of the Bill, supported by all parties, barring BJP”

Now, actor Suriya who is known for supporting financially weak students through his “Agaram” foundation, came up with a video to feed students confidence which is the need of the hour. “He started his video with a poem of Bharathiyar and said that he wants students to be fearless as a dear brother of them.

“Do you have the biggest problem you had one week ago or one month ago now ?? Think of it. It would have been reduced or it would have been reduced. An exam is not bigger than your life. If you feel bad, talk with your loved ones with your whole heart. The fear, sorrow, sadness and disappointment are the emotions that would fade away in few moments” Suriya said in the video.

“Deciding to end your life is a lifetime punishment you are giving to your loves ones. Don’t forget it. I have failed in lot of exams. failed in a most miserable way. I can say that marks and exams doesn’t mean the entire life. There are lot of things in life to achieve. Be brave and confident, let us all win in our lives, in a huge way” the actor added which is going viral in social media platforms.