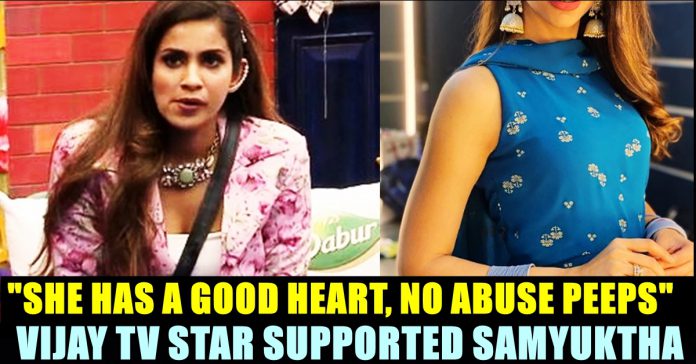 Samyuktha got evicted from the Bigg Boss season 4 as the fifth contestant on the 56th day. The TV actress and senior model said that she got some good friends inside the house and said that she will be missing them. Meanwhile she also felt happy as she is going to meet her son after a long time. Now, after her eviction, videos and pictures of Samyuktha reuniting with her child are doing rounds in the social media platforms.

Check out the videos below :

Samyuktha came under scanner ever since she became the captain of the house with Balaji Murugadoss’s help. The less number of footage she occupied in the past week and the way she indirectly criticized the upbringing of Aari Arjunan could have caused her eviction. Aari Arjunan, Balaji Murugadoss, Soma shekar, Sanam shetty, Aranthangi Nisha, Jithan ramesh and Anitha Sampath were nominated for the eviction initially.

“Her strategy is to stay safe till the finals without getting nominated. When it comes to open tasks, she would accuse the weaker contestants to play a safe game. She also behaves rude at times” said Anitha while nominate Samyuktha. Bigg Boss announced that Samyuktha is getting nominated instead of Anitha as a result of which the actress and model got evicted.

Days before her eviction, many kind of reactions regarding Samyuktha surfaced in the micro blogging social media site. On seeing those reactions, anchor Bhavana who is known for hosting Vijay tv shows, came up with a tweet suggesting people not to hate Samyuktha.

“I know Samyuktha for years and she has a good heart.” said Bhavana and expressed her wish of making Samyuktha stay inside the Bigg Boss house. She also said that no hate or abuse needed against her and suggested them to spread peace.

“We all know shows like ‘Big Boss’ project one version of an induvidual’s personality.I have known #Samyuktha for years and she has a good heart.I wanted her to stay back to give her a chance to let the audience see that too.No hate/abuse needed. Peace peeps!” read the tweet of Bhavana.

We all know shows like ‘Big Boss’ project one version of an induvidual’s personality.I have known #Samyuktha for years and she has a good heart.I wanted her to stay back to give her a chance to let the audience see that too.
No hate/abuse needed.
Peace peeps!👍💪@samyuktha_shan

Bhavna received mixed reactions for her tweet. Check out some of them below :

Love #Samyutha❤️❤️❤️ she is one strong woman, beautiful mother n above all a strong player in the house. She has always been excellent at tasks n gave her best. Wish she continues in the show❤️❤️

200% disagree with you Bahavna.
Samyuktha is a poision.Her attitude and the words delivered in Bigboss are so arrogant and poisonous.
Like the proverb"dont judge a book with its cover " like thaf can be a model, beautiful,she can be rich etc..but her attitude and word is poison

Bhavna samyuktha does not derserve this much hate. For the 1 or 2 mistakes commited and made huge by Twitter's blind supporters. I disagree that one side was shown. Both sides were shown but people believed what they wanted to believe. Sam is gold when compared to other hm's

Previous article“Film Of The Year” – Samantha Declared This Tamil Film As The Best Film Of 2020 !!
Next articleAfter Having 8 Months Of Relationship, Man Married A Doll !!

Young woman named Gireeshma killed her boyfriend by poisoning his drink in order to get rid of him permanently. She committed the crime after...