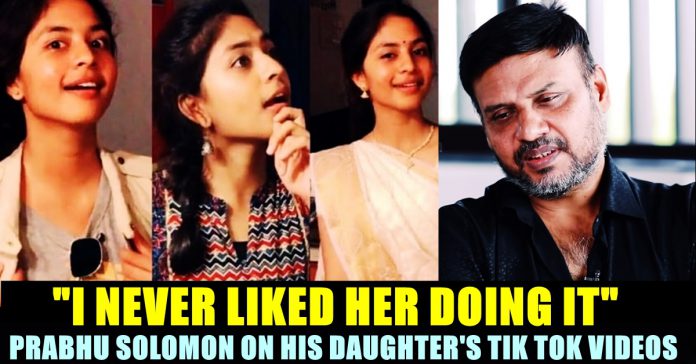 Director Prabhu Solomon who is known for making quality films such as “Mynaa”, “Kumki”, “Kayal”, appeared in an interaction lately and talked about his upcoming multilingual film “Kaadan” as a part of its promotion. During the conversation, the filmmaker has opened on his disagreement with his daughter’s presence in social media as a Tik Toker. He said that he advised her as a father and asked her to stop it as he doesn’t want her to involve in such things.

Prabhu Solomon debuted to Tamil film industry through 1999 film “Kannodu kanbathellam”. After having a mediocre filmmaking career till late 2000s, the filmmaker rose to fame through his romantic tragedy film “Mynaa” which gave an immense break to everyone who were associated with the project. After that, Prabhu Solomon gave another blockbuster through “Kumki” in which he introduced Vikram Prabhu, grandson of legendary actor Sivaji Ganesan and son of actor Prabhu. His “Kayal” also impressed fans in big time and the filmmaker was lauded for giving importance to the script instead of the lead actors.

The filmmaker grabbed a special place in the industry through his works. In the recent interaction he participated, Prabhu Solomon expressed his disappointment on the implementation of new EIA Draft 2020. He said destroying natural resources can never be a growth for the environment and added that leaving a peaceful atmosphere for our future generation is actual growth.

The filmmaker further said that people will be forced to use oxygen bag in less than 10 years as they are destroying the natural resources without thinking about the consequences. He who talked about the importance of farming, said that India already started importing food materials from South Korea. “In 20 years, we will only have buildings around us. We can’t consume buildings while starving” he warned.

While talking about his upcoming film Kaadan, Prabhu Solomon said that it is a film about elephant abuse. He narrated the core plot of the movie and revealed that a real incident that took place in Assam inspired him to make the movie. The film is about a corporate company breaching a path regularly used by Elephants and building a compound around it. “If we people have a problem with the government, we are raising our voice by protesting in Marina. Who would voice for the creatures like elephants ?? That’s what Kaadan is about” the filmmaker said.

At one point, when the filmmaker was asked to comment on the growth of his daughter in social media without using his identity, the filmmaker said that he completely dislike her presence in social media as a Tik Toker. Hazel Shiny, a popular Tik Toker who used to have millions of followers in the micro video uploading social media app, has been uploading her recreations in Instagram since the app got banned in India.

She is having a separate fan base in social media platforms for her cute expressions and skillful recreations of Tamil movie dialogues and songs. Only after raising to fame, public came to know that she is a daughter of the renowned filmmaker. Check out some of her reactreation videos below :

When Prabhu Solomon was asked whether his daughter expressed her wish of becoming an actress to him, he said “I don’t like her doing these kind of activities.” who went on to add the reason behind it. “I am a person who is leading a spiritual life. So I have to condemn her on few things as a father. I have advised her to stop it.” said Prabhu Solomon. “It was something did for fun. She herself didn’t expect the reach. However, I have asked her to stop it” he added.

Previous articleFor The First Time A Tamil Word Mentioned In US Democratic Speech !! WATCH
Next articleSonu Sood To Drive Car For A Man To Visit His Wife’s Grandparents ??