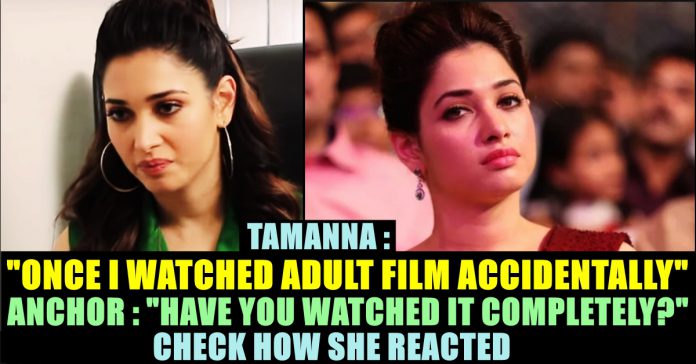 Tamannaah Bhatia is an Indian actress who predominantly appears in Tamil and Telugu films. She has also appeared in several Hindi films. In addition to acting, she also participates in stage shows and is a prominent celebrity endorser for brands and products.

In her promotional interview with Behindwoods for the recently released film Devi 2, Tamannah shared many incidents that were never shared  by her before. Devi 2 is a 2019 Indian Tamil horror comedy film co-written and directed by A. L. Vijay. It is a sequel to the 2016 film Devi. The film features Prabhu Deva, Tamannaah, Nandita Swetha, and Dimple Hayati in the lead roles, while Kovai Sarala, RJ Balaji, and Saptagiri plays supporting roles. The film was simultaneously shot in Telugu as Abhinetri 2. The film released on 31 May 2019.

In the interview when Tamannah was asked whether she ever regretted for buying something after seeing the price of it, Tamannah shared an incident that she faced while buying bouquet in a flower shop.

“After asking him to change the flowers from both the bouquets in order to improve the quality, I asked him how much and I literally had heart attack after hearing the money he required for those bouquets. He asked me 6,000 Rs. and I paid it which is making me regret even now” said Tamannah in a most hilarious way.

“I watched an adult movie accidentally when me and my friends were planning to watch some movie. We didn’t know that the CD had some adult content and I was not aware that their parents would have those CD’s to watch” said Tamannah who accepted that she ended up watching the full video with her friends.

Apart from these Tamanna also shared about many things including he favourite actors in Tamil industry. When she was asked about being the host of Tamil Bigg Boss 3, she wanted her friends such as Shruti Haasan, Vishal, Karthi and more to go inside the house as contestants. In 2005, Tamannaah made her Telugu film debut in Sri, and the next year she appeared in her first Tamil movie, Kedi. In 2007, she starred in two college-life-based drama films, Happy Days in Telugu and Kalloori in Tamil.

Her projects include the successful Tamil films Ayan, Paiyaa, Siruthai, Veeram, Dharma Durai, Devi, Sketch. On the work front, Tamannah was waiting for the release of her movie Khamoshi. It is the remake of Nayanthara’s yet-to-release film Kolaiyuthir Kaalam under the direction of Chakri Toleti. The film was scheduled to release on June 14,2019.

What do you think on this interview of the actress ?? Comment your views below !!

Previous article“Why No One Opposing This ??” Vijay Fans Questioned Those Politicians !! Check How Santhanam Reacted !!
Next articleWhat Made Netizens To Think That Anupama & Bumrah Are In Relationship ?? Check Out The Reason !!

A video of a Tamil nadu police constable questioning about a motorist's caste details while issuing him challan for not wearing safety mask went...