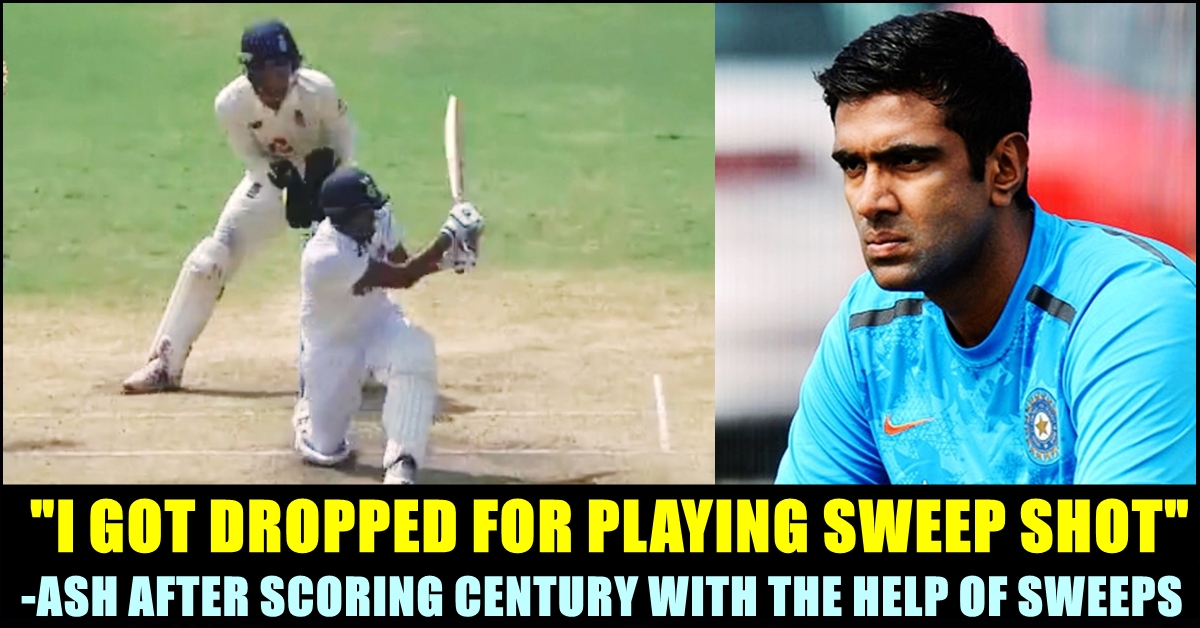 In the pitch which became a subject to controversy due to the comments of a number of former foreign players, batsmen of team India including Rohit Sharma, Ajinkya Rahane, Virat Kohli, Rishabh Pant and Ravichandran Ashwin took a master class on how to bat. Many including Michael Vaughan, Mark Waugh, Kevin Pietersen blamed the Chepauk pitch for the collapse of English batsmen in the first innings. However, Ravi Ashwin came in to the crease and gave a fitting reply by scoring a century. He who executed his batting plans by playing sweep often, revealed that he got dropped at 19 for playing the shot.

Rohit Sharma who scored a brilliant 161 in the first innings, in the post match interaction, said that playing sweep shots in the spinning track is one of the best options. His century included several sweep shots and he got out while playing the same shot as well. Ravichandran Ashwin, in the second innings, scored boundaries by playing sweep shots and revealed that he got dropped for playing the shot at the age of 19. Sharing the post match video, Tamil nadu player Abhinav Mukund posted a tweet asking selectors and coaches not to judge a player by the shots they played.

Ravichandran Ashwin became the talk of the town after delivering a terrific century in the second innings of India’s second test match against England at his home ground Chepauk, Chennai. Entire internet came up with tweets lauding the 34 year old who already claimed legend status with his batting and bowling skills.

A moment to cherish forever! @ashwinravi99 gets his Test💯 in Chennai and Md. Siraj erupts in joy. The dressing room stands up to applaud.🙌🏾 #TeamIndia #INDvENG @paytm pic.twitter.com/ykrBhsiTbl

Post the match, Ravichandran Ashwin revealed that he got dropped at the age of 19 for playing a sweep shot. “The last time I was sweeping was when I was 19 years old. I played a couple of sweep shots and got dropped from the side and not played a sweep for the past 13,14 years.” the all rounder said.

“I have been practicing the shot only for the past 10 days and very very thankful that the plan’s really paid off.” he added. Further the cricketer gave credits to India’s batting coach Vikram rathore who gave him the freedom to express himself. “I .love to credit him for how my batting has gone through for the last four, five test matches.” he said and expressed his happiness for scoring a century and picking a fifer in his home ground Chepauk”

“Swept at 19, got dropped. Swept at 34,scored a hundred at home. I know a cricketer who paddle swept a fast bowler and got out, raising up a storm. I know another cricketer who reverse swept in a big game and got out, raising up a storm again. Should we stop judging players on the shots they play that may/may not come off and start looking at the conditions that were played in instead?” wrote Abhinav Mukund on seeing the video.

Should we stop judging players on the shots they play that may/may not come off and start looking at the conditions that were played in instead?

After taking five wickets in the first innings, many criticized the “Chepauk” pitch by saying that it is a spinner friendly “bad” pitch. However, Ashwin has displayed a master class on how to bat by hitting 14 boundaries and one six. Now, he already took three wickets in the second innings of England and is highly expected to pick two more wickets to become a player who scored century and 10fer in a same match.