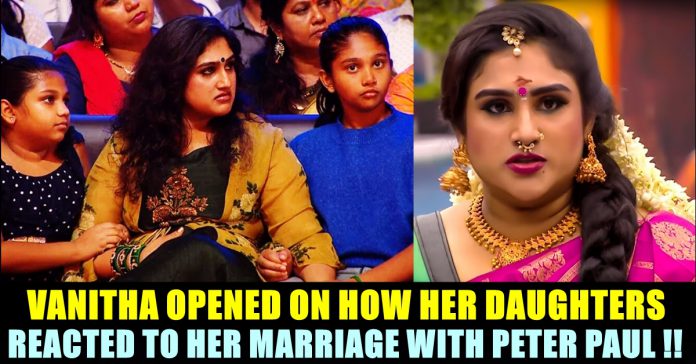 We first broke the news on Vanitha Vijayakumar’s marriage with Peter paul on 27th of this June. Now, the actress came up with a official note on her marriage explaining how it all happened and on how her daughters reacted on hearing about her relationship with Peter paul.

With his presence, Vanitha says that things worked out well with ease and stress free for her Youtube channel who goes on to add how he felt when he proposed her for marriage. “When he asked for my hand in marriage I was speechless. (Deep inside I was screaming yes though)” wrote an emotional Vanitha.

Vanitha who wanted her daughters’ approval, made Peter Paul to speak to her daughter it seems. “And when he spoke to him, they screamed Yes”Vanitha’s post read. Vanitha further said that tears welled her eyes when her daughters said that this was the best thing that has happened to her. “They wanted him in their lives as well” the actress wrote.

The Bigg Boss participant said that struggled a lot while being a single mother when she received no support from her “so called family”. “I have lived my life pleasing everyone around me which in due course made me take decisions out of fear and confusions. For once I have decided to live my life myself and do what makes me happy. Live life to the fullest and have someone solid to hold my hand forever as I grow older” Vanitha’s note read.

She also thanked everyone who stood by her decision and encouraged her. Talking about her “would-be”, Vanitha said that he is a filmmaker by profession. “A simple, caring, loving and honest human being who stole my heart and made me fall head over heels in love with him. The rest you will come to know of his projects on screen soon” she said.

This post from Vanitha received wide reach and people across the social media platforms started appreciating her for her bold decision. The invitation suggested that her marriage is going to take place on 27th of June and is expected to take place with her close friends and relatives.

After having a bitter experience with two of her marriage partners in the past, Vanitha’s thought of marrying for the third time gave hope to many single mothers who are struggling in their life with their children. She who gained a separate through Bigg Boss show in Vijay Tv hosted by Ulaga nayagan Kamal Haasan, went on to clinch the title in “Cooku With Comali”, a cookery show which had celebrities of Vijay Television as participants. Now, the actress is very much busy in making contents for her youtube channel “Vanitha Vijayakumar” through which she is keeping her 4 lakh plus subscribers engaged through her cooking related videos.

Followed by the demise of DMK MLA J. Anbazhagan, many people including chief minister Edappadi Pazhaniswamy of ADMK party offered their condolences to the...