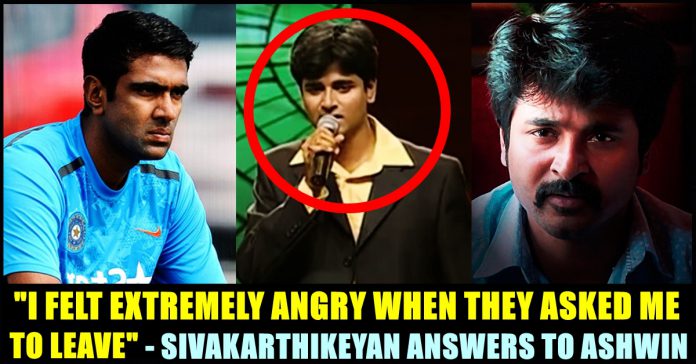 Ravichandran Ashwin and Sivakarthikeyan, two of the most interesting personalities from two different fields interacted with each other for the youtube channel of the former. In the 49 minute long virtual interaction, the duo shared many interesting facts about their respective fields and expressed their admiration towards each other. Ashwin who questioned Sivakarthikeyan regarding his initial stages of cinema career, made him open up on several incidents, including the one where the actor she tears on stage. Siva also shared about how he felt while facing rejection during his initial stages and what would help the youngsters to achieve their goals in cinema industry.

Tamil nadu based Indian spinner Ravichandran Ashwin has been winning hearts as a host, ever since he started his youtube channel “Ravichandran Ashwin” during the COVID 19 lockdown. He enjoys 7 lakh plus subscribers for his youtube channel with huge viewership for each of his videos. Most recently, he came up with a surprise video interview with actor Sivakarthikeyan and treated his subscribers with funny yet insightful questions.

Sivakarthikeyan who opened his heart out to the leading spinner of team India, talked about many things including his favourite directors, struggles he faced during earlier days and about how much he admires Ashwin as a cricketer. At a point, Ashwin wanted Sivakarthikeyan to answer on what kind of situations would challenge youngsters who hail from rural parts of the state to achieve their goal in cinema industry.

Answering to him, Siva said that the atmosphere of Chennai is itself a challenge to them and wanted the aspirers to maintain patience. The actor said that there won’t be a situation where the aspirers would be treated with utter respect and proper answer. “Chennai is itself a challenge. Everybody would have some kind of pressure here. Even the traffic is an added pressure. So people who come here should adapt with the speed and should keep trying without getting tired” Sivakarthikeyan said who also wanted the youngsters to self-value.

“Each and every attribute including how you speak matters in cinema. Just because one knows about something, he couldn’t achieve it just like that. Consistency is also important. One should keep proving himself here” Sivakarthikeyan said and went on to express his regret over the incident where he cried on stage during “Remo” release due to intense pressure.

“I expressed my pressure by crying on stage. I felt bad on that day for expressing my emotion that way because who watch it from rural parts might think that cinema is difficult and change their decision of pursuing it for a career. I told myself that I should only be spreading positivity about cinema and learned the same from that incident. Pressure will be more, especially when you are coming from other district without background. One shouldn’t lose his hope and keep trying” Sivakarthikeyan said.

Sivakarthikeyan also shared about how he felt while facing rejection during the initial stages of his career. “While they were auditioning me for the role of an anchor for “Kalakka povathu yaru” show, they asked me to perform two links and I started shivering. I did mimicry in several stages but now they are asking us to do “link”. I don’t know what to do, how to start and stumbled. They immediately asked me to remove my coat and asked me to leave by saying that I can do “anchoring” for some other show” Sivakarthikeyan shared.

“I felt extremely angry and looked for ways to blame those who rejected me. I fekt angry on them because they didn’t give me time to prepare and for asking me to perform directly on shoot. After crying over it, I realized that the mistake is on me as I didn’t do research about “Anchoring” before going and didn’t ask anyone about the same” the film actor said. The duo went on to talk about several other topics throughout the interaction and the video is winning hearts by trending at No. 11th spot on Youtube.

Previous article“Winner”, “Gemini” Fame Kiran Trolled Men Who Approached Her Through Mail !!
Next articleSamantha Uploaded Story On The Day Of Her Marriage Anniversary !! Fans Got Emotional

New CCTV footage, showing the suspect in the murder of 24-year-old Swathi at Nungambakkam station in Chennai, has been released by the Government Railway...