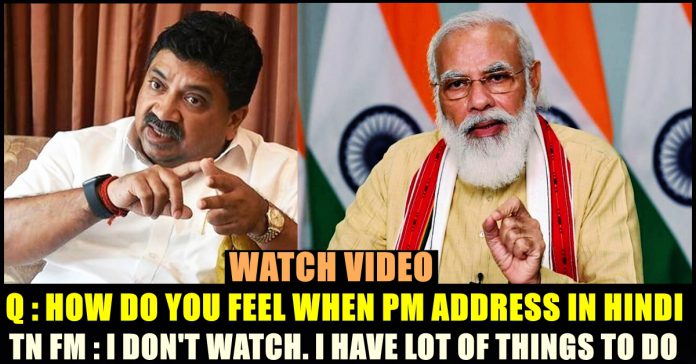 In a recent interaction with Jyothi Malhotra, senior consulting editor of The Print, Tamil nadu’s finance minister Dr. Palanivel Thiagarajan said that he never listened to the speeches of Prime minister Narendra Modi as he has other productive things to do. The video which is streaming in the official youtube channel of The Print, shows PTR talking on “Why Centre’s Covid handling is a Disaster”. The answer PTR provided when he was asked on how he feels as a Tamil guy while listening to the Hindi speeches of PM Narendra Modi, he directly said that he never listened to his speech.

In the interaction, Dr Palanivel Thiagarajan talked about how the new government is going to cope up with the situation of surging COVID 19 cases in the state. He said that the previous government was hiding the actual numbers while disclosing about the positive cases in the state and added that he proved it in his paper. He said that government communicating with people would help them to face the situation. When he was asked about his other priorities apart from COVID 19, PTR said “It is very hard to have any other priorities when you are in the middle of a once in a lifetime pandemic. It is very very clear. As of today, 100 % of DMK’s efforts are focussed of the pandemic”

After discussing about the COVID 19 situation in Tamil nadu and other states such as Uttar Pradesh, Delhi, Gujarat, Madhya Pradesh, Jyothi Malhotra asked PTR “As a Tamil guy, when you hear the Prime minister talking in Hindi, what do you think ? You think you don’t understand what he is talking ?”

Answering to the question, The Finance minister of Tamil nadu said “Without any disrespect, I don’t really watch the Prime minister’s speeches. I have a lot of things to do” Jyothi interrupted saying “Maybe you don’t watch them Mr. Dr. Thiagarajan but other people do watch.”

“You asked me a question “what do you think?” I’m saying I don’t think because I don’t watch. I don’t watch because I don’t find any value in them. My Hindi is plausible but not good enough for me to really understand. I have a lot of responsibilities. I have never seen a single speech of him so I don’t have an opinion, I am sorry” PTR finished answering the question.

Watch the full interaction between the Finance minister and Jyothi Malhotra below :

Previous articleWhen A.R Rahman Got Humiliated In School For Not Attending Classes !! WATCH
Next article“Ratchasan” Director Opened About The “Inbaraj” Character He Made In His Film After The “Rajagopalan” Issue !!