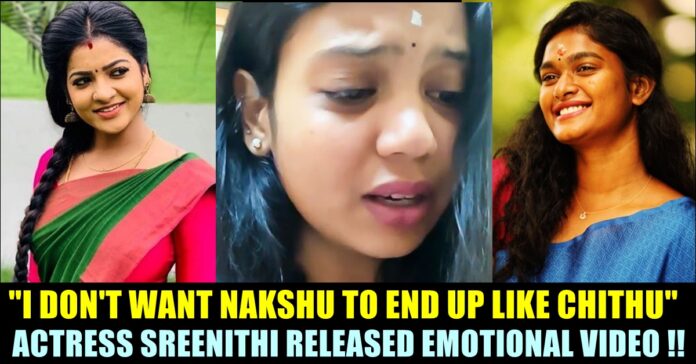 TV star Sreenithi who recently grabbed headlines by uploading a series of stories expressing her wish about marrying actor Simbu, recently released a video in her Instagram handle, saying that her friend and actress Nakshathra is the reason for her depression. Sreenithi has been uploading videos of herself feeling depressed for past few days and was interviewed by private YouTube channels regarding the same.

The actress also became a subject to online attention due to the review she gave after watching “Valimai” movie in theatre premises. For past few days, Instagram timeline of the emerging star is filled emotional posts that showed herself crying and exposing the brusies in her body. Sreenithi is known for appearing as a child artist in a Vijay TV serial named “7 C” which was made of children. She also worked majorly in Zee television.

On the release day of “Valimai”, while giving interview to a YouTube channel about her opinion on the film, Sreenithi, after saying that the film was good, added “I can watch Ajith sir in any medium I want but to watch “Valimai”, lot of patience needed. I don’t have that”

“The film is terrible. Bike keeps running throughout the film but the film’s screenplay is not. Ajith sir did well” she further said.

Sreenithi faced lot of hatred from the fans for her comment in the public review about “Valimai” movie. Now, talking to Behindwoods about the comments dropped by the fans of actor Ajith kumar, Sreenithi said “I went to watch “Valimai” only because my friend acted in it”

“I decided to give my opinion to the YouTube channel only after he invited me more than one time. Being an anchor myself, I couldn’t refuse giving my bit like others. Though I pointed out the positives of the film initially, they asked me about the film. I can only tell how the film was, right?” said Sreenithi.

Further, in the interview, Sreenithi opened about the real reason behind her depression. The emerging star said that due to her mother’s activities and the excess amount of love she is receiving from her, caused her the depression and bruises.

Now, Sreenithi appeared in a video and said that her friend Nakshathra and her relationship with an actor caused her the depression. Nakshathra is known for appearing in serials such as “Velli Parisu” in Colours TV etc. In her video, Sreenithi said that she got engaged with the upcoming actor and started cutting ties with her.

Throughout the video, Sreenithi said that she didn’t want Nakshathra to end up like Chithra who died of suicide while staying with her boyfriend in a hotel room. “I regret for not talking with Chithra and about her relationship. I feel that I could have changed her mind. I don’t want the same to happen to Nakshathra who is my dear friend” said Sreenithi who added that it is the reason for her depression all these days.

After replying to the official Twitter account of Mumbai Indians for using his song "Verithanam Varithanam" for one of their videos, Vivek Lyricist received...