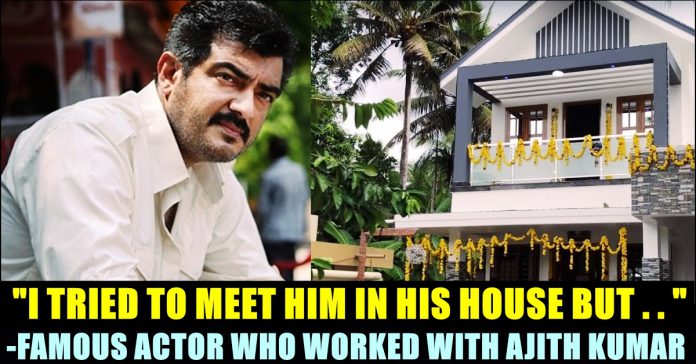 “I Don’t Need His Money” – Famous Actor Who Worked With Ajith Kumar !! WATCH

Popular dance choreographer and actor Sivasankar recently appeared in an interaction with a private youtube channel and expressed his disappointment over actor Ajith kumar for not giving him acting opportunities after working together in “Varalaaru”. The 72 year old dancer said that he even visited the house of the “Thala” actor but sent away by the watchman.

“Yes I taught dance to “Thala” in Varalaaru. I am not denying the fact that he praised me for the work I did for the film. Has he ever called me to work with him again ?? Did I cause any harm to him ? I will get many opportunities if he says one word about me. But he didn’t say it. Am I asking money from him ?” Sivasankar Master asked through the interview.

Further, the dance choreographer revealed what happened when he tried visiting the house of the actor. “When I tried entering his house, the gate keeper sent me away. He could have seen me through the camera which was planted at the gate. But didn’t call me. These incidents hurts me the most” Master said.

However, he wished god’s blessings for the “Mankatha” actor. “He is a good human being. helping a lot of people. I want him to live for a long time.” he added. Watch the video below :

Producer of the project recently announced that the updates of the film will be start surfacing from 1st of May which marks the 50th birthday of actor Ajith kumar.