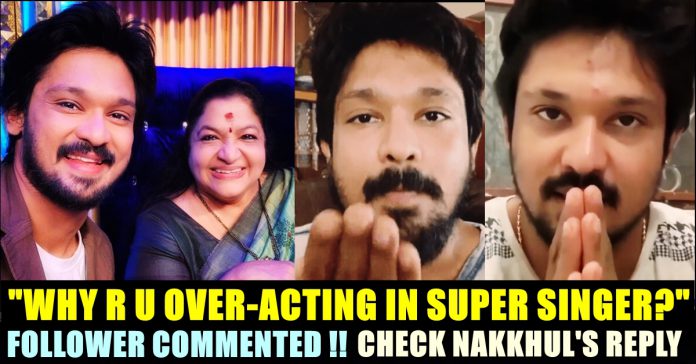 Known for his charming looks and boy next door attitude, Actor Nakkhul who debuted through Shankar’s “Boys”, participated in Vijay TV”s Super singer junior show as one of the judges along with singers legendary singers Chithra, Shankar Mahadevan. Apart from acting stint, Nakhul sung some of the familiar songs such as “Karkka Karkka Kallam Karka” from Vettaiyadu Vilayadu, “Kaadhal Yaanai” from Anniyan etc.

As a judge of the singing show which involves kids under age 13, Nakhul, instead of making honest comments on their performance, would always encourage them to make them push boundaries. He also can be seen performing for their singing to make them feel good amidst the tension of singing in front of such senior singers.

Blessed to be Sitting beside a Legend @kschithra amma. She reminds me so much of my Mother. Her charm is infectious.. the children and I are so blessed to be in her presence. Ma #saraswati 😇🙏🏼 . . #ssj7 #supersingerjunior #judge #legend #amma #legend

Now, the actor who is pretty much active in Instagram, came across a comment for one his post saying that he is “over-acting”. The online user said that she doesn’t like the actor / singer for the way he is behaving in the show. “I don’t like you because I think you are over acting in Super singer” the comment read. When Nakhul replied to the comment, the user who didn’t expect his reply deleted it immediately it seems.

However, Nakhul who had the screenshot of the comment and his reply, posted it in his story and expressed his disappointment over the user for deleting her comment when he was expecting a response for his reply. Nakhul who appreciated the honesty of the online user, said that he never acted in Super singer and what she saw was his real life personality. “I don’t expect everyone to like it” he said in his comment.

The actor further added that he wanted the children who are performing in front of legendary singer like Chithra and Shankar Mahadevan to feel that Nakkhul is on their side. Nakkhul said that he wanted to lighten their spirit rather than being a regular judge. “One thing I have learnt in my experience, you can be the juiciest and sweetest of the peaches and yet there will be someone who can’t stand the peaches” the actor wrote in his reply comment.

Actor Nakkhul and his wife Sruthi recently gave birth to a baby girl and named her as “Akira”. On the work front, Nakkhul who was last seen in “Sei” is all set to appear in “Eriyum Kannadi”.

Have you seen Nakkhul in Super Singer show as judge ?? Comment your views !!

Previous articleFollower Wants This Actress To Go Through A “Nose Surgery” !! Check Her Reply
Next articlePeter Paul Admitted To Hospital !! Vanitha Gets Emotional

While media outlets and public believed that Raina left CSK and reacted due to the assault in his uncle's home, a shocking new update...

A report in The News Minute emerged saying that the cops who are accused of killing a youth named Vignesh in their custody, bribed...