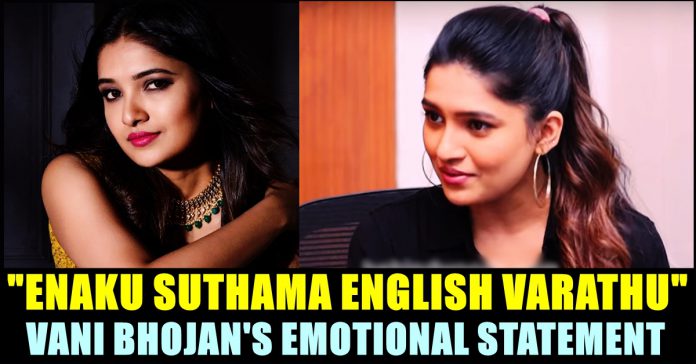 Vani Bhojan opened her heart out in this recent interaction of her with Tara for the youtube channel Behindwoods. The actress who rose to fame through her Sun tv serial “Dheiva Magal”, is now debuted to silver screen with Ashok Selvan’s “Oh My Kadavule”. As the movie is running successfully in theatres, the actress appeared in this interview and revealed about many unknown facts about herself.

Tv stars making it to big screen is not something new to Kollywood industry. A biggest example is Sivakarthikeyan and Santhanam who started their career merely as comedians in Vijay Television and now excelling in Tamil film industry as leading stars. Vani Bhojan is the recent one to be added in that list.

Vani Bhojan is one of the many celebrities who are very much active in social media platforms. She has a separate fan following in social media platforms for her looks and cute expressions. She is very much loved by her followers and is often appreciated by them for the way she carries herself. Fondly called as “Chinnathirai Nayanthara” by her fans, Vani Bhajan resembles the Lady Superstar with her looks and with the characters she plays.

In this recent interview, for the first time, the actress has shared about the struggles she faced to enter Tamil film industry. “First I was working with the Kingfisher airlines as a crew member. First I worked in Indigo and came back to Kingfisher. Airlines was like a dream for me. I used to say that I want to become a air hostess. I also wished to become a model as my father is a photographer. When I was supposed to join spicejet as manager, I couldn’t get the job as I don’t have a degree. As I couldn’t complete B.A English literature, I failed to get the manager role. I lost both the jobs and I didn’t know what to do. At that time, my account balance was Rs.320” said Vani Bhojan.

Further the actress revealed that she doesn’t know how to communicate in English as well. “I still remember that money. I just had 320 rupees. Now I own a house in Chennai. I also have a car. I am not saying it for my pride. Its all about hard work. I always believe in hard work, if you work hard you deserve everything. Even I can’t even speak English properly. Though it is not a very big quality, I am telling this for those who are thinking that way. Its just a language. However I learnt it later. If you stay strong enough, you can learn a lot of things” she said in the interaction.

Apart from these, Vani shared about many things that went throughout her life. Vani Bhojan who just saw a release in Tamil industry, is all set to debut in Telugu film industry through a film which is being produced by Vijay Devarakonda.

What do you think on the struggle faced by the actress ?? Comment your views below !!

Previous articleMysskin’s Open Statement About His Own Film !! WATCH
Next articleFan Questioned Raiza About BIGG BOSS 1 After All These Days !! Check Her Reply

VJ Parvathy Shared About The Troubles She Faced As A Woman In Her Life !! WATCH

In the most recent episode of "Survivor" show, video jockey Parvathy and Gayathri shared about the troubles she faced as a woman in her...