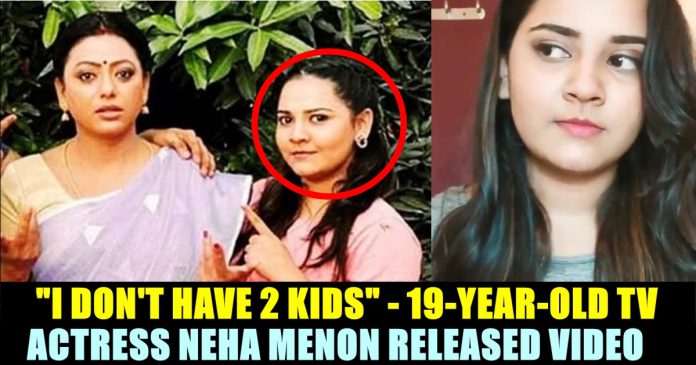 The sarcastic reply of Baakiyalakshmi’s Iniya on Instagram has created a huge shock for her followers. While conducting a question and answer session with her followers, Neha Menon replied to the question which went like, “Are you married?” to which she sarcastically replied, “Yes, I have 2 kids!”

This statement of Baakiyalakshmi’s Iniya is going viral among her Instagram followers and among the fanatics of the serial Baakiyalakshmi. As a result, Neha Menon has again posted a video explaining her sarcastic reply.

Neha Menon is a Kollywood Film and Television Actress, who was born in Chalakudi, Kerala, India on the 9th of February 2002. This celebrity is active in the Tamil cinema industry since 2012. The source of income is purely from Serials and Movies.

With half a million followers on Instagram, Neha Menon is very much active in her photos/video sharing application. She loves interacting with her followers and she often posts an ‘Ask me anything’ story on the Insta page. To which she tries to answer all the questions her followers ask.

On her recent Q & A story, a follower asked, “Are you married?” Being a teenager Neha Menon tried to reply to this question in a sarcastic manner. On this note, Neha Menon replied back as, “Yes, I have 2 kids!”

Neha Menon’s reply of having two kids was a surprising shock to her followers and the fanatics of the serial Baakiyalakshmi. With this reply, few followers understood but it was a sarcastic reply but few of her followers believed it was true that Neha Menon is married with two children.

The followers started to ask her many questions regarding Neha Menon’s marriage life. They asked her to show the picture of her husband, the pictures of her wedding. They asked when she got married and why she didn’t reveal it until then.

To end all these doubts of her followers, Neha Menon shared an explanation video on her Instagram story. Neha said, “I answered it in a sarcastic tone. Do I look married? But I didn’t expect that my followers will be in shock this much. I am not married yet. I am only 19-year old and studying for my final college degree.”

Woman Tennis Player Adjusted Her Top Inside The Court !! Here’s What Fans Reacted !!

A lot is being said and discussed about gender equality but one more incident has taken place which makes us believe that implementing gender...