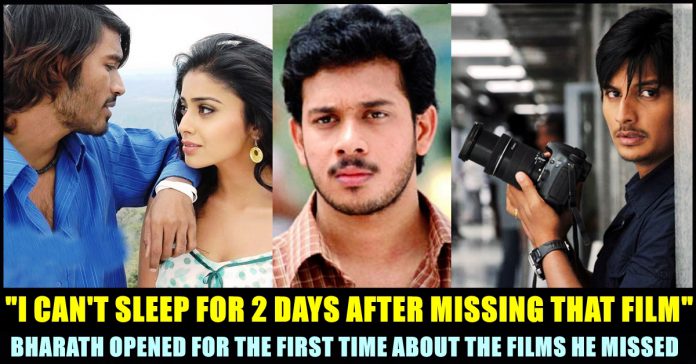 “I Didn’t Sleep For Two, Three Days” – Bharath On Missing This Film !! WATCH

Actor Bharath who is known among Tamil audience for acting in quality films such as “Kaadhal”, “Kanden Kadhalai”, “Pattiyal”, “Veyil” is all set to appear in a film named “Naduvan” directed by Sharang. In the promotional interview of the film, Bharath opened on the films he missed in his acting career and expressed his regret over it. The actor said that he missed “Thiruvilayadal Arambam” directed by Boopathi Pandiyan and “Ko” of KV Anand. He also said that he didn’t sleep for two, three days after missing “Ko” as the film was doing extremely well in box office during its release time.

Debuting through Shankar’s “Boys” as one of the 5 leads, Bharath rose to fame after acting in Balaji Sakthivel’s “Kaadhal”. Despite of having a number of hits such as “Veyil”, “Pattiyal”, “Em Magan” Bharath faced a downfall due to continuous flops. However, the actor is currently concentrated in doing quality films and his most recent flick “Kaalidas” received well by the critics and audience.

Now, his next film “Naduvan” is gearing up for release and the actor is actively participating in the promotional interviews. In an interview with Indiaglitz, Bharath was asked to name some of the films he was supposed to do and missed which went on to become massive successes. After a deep thought, Bharath said that he missed “Thiruvilayadal Arambam” and said that he regretted for it.

“I was supposed to do “Thiruvilayadal Arambam” at that time. When Boopathi pandiyan narrated the story to me, I don’t know what went wrong. I couldn’t judge it and said to him that I don’t know how the film will do. Due to that miscalculation, I missed that film. Dhanush did it better than me as a local boy. After watching the film, I talked with Boopathi Pandiyan sir and appreciated him for making the film commercially. I also said to him that I missed that movie” Bharath said in the interview.

Bharath also revealed that Dhanush was supposed to “Kaadhal” film which acted as a huge break for him. “I was also supposed to do “Ko”. I missed that film in the last minute without my knowledge. That’s a huge regret for me. K.V Anand sir is the one who saw me through the camera for the first time. After missing “Ko”, I didn’t sleep for two, three days. That film became a massive hit after release which made me feel bad” said Bharath.

Abhirami Venkatachalam, one of the Bigg Boss contestant who is known for appearing in "Nerkonda Parvai" movie has appeared in an interview with Behindwoods...