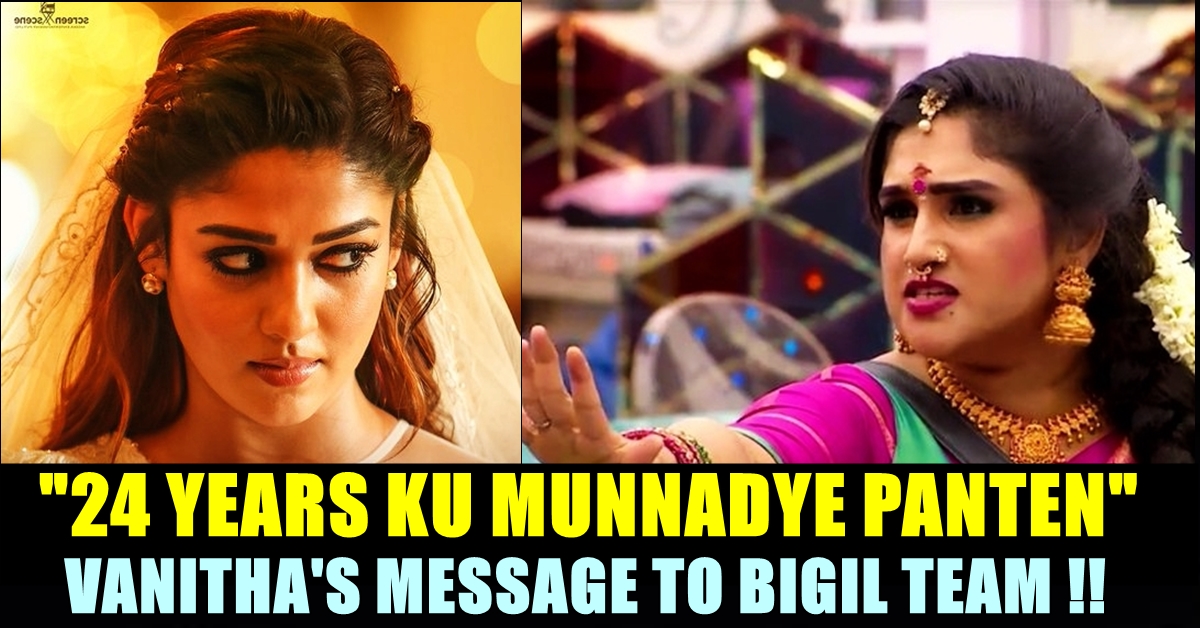 Vijay’s Bigil hit the screens today and is being watched by millions of people. No words could describe the craze level that is being created by Bigil Trailer. Director Atlee, who himself a biggest fan of actor Vijay, carved the actor inch by inch it seems. The most awaited trailer of Bigil released on Saturday and left the Internet in explosion. The film which marks the third collaboration of Atlee and Vijay, has actor Vijay in the lead in three different get ups.

Vijay is releasing his movie for Diwali for the third consecutive time after Mersal and Sarkar. Meanwhile, Vanitha Vijayakumar who rose to fame through the third season of Bigg Boss show, has recently posted a tweet in her account by saying that she released film for Diwali with Vijay, 24 long years ago. The actress said that she feels privileged to be acted with the star and tagged Nayanthara, Atlee, Archana Kalpathi in her tweet.

The tweet of Vanitha read as “24 years ago #Vijay first #Diwali release was with me #chandralekha.we both go way back and share wonderful memories .im proud and priveledged to be #Thalapathy ‘s heroine and always will be😘” PodraVediya”

#bigil #Thalapathy @actorvijay @Atlee_dir @archanakalpathi @NayantharaU
24 years ago #Vijay first #Diwali release was with me #chandralekha.we both go way back and share wonderful memories .im proud and priveledged to be #Thalapathy 's heroine and always will be😘#PodraVediya pic.twitter.com/q2CQiFVLoo

The daughter of Tamil veteran actor Vijayakumar, Vanitha Vijayakumar played the love interest of Vijay in the movie which was released on 1995. It is notable that the movie is the debut film for Vanitha.

Being one of the most controversial contestant of the show, Vanitha was eliminated from Bigg Boss house for two times due to receiving less number of votes from the viewers of the it. Vanitha Vijayakumar who faced the wrath of public during her stint in Bigg Boss, got eliminated, made a comeback and won hearts of many viewers with her bold statements and with the way of approaching issues. She gained more support just few days before her eviction due to the freeze task in which she spent some lovable time with her adorable daughters. The actress ended up receving award for being the gutsiest contestant of the season.

U will be proud but thalapathy doubt tha pic.twitter.com/YaDdB8irXS

Ashok Selvan Flirts With Vani Bhojan Publicly !! Clarifies After Getting Trolled !!
Woman Made A Guy “Criminal” With Just One Complaint !! Here’s What Happened To Him !!
Advertisement